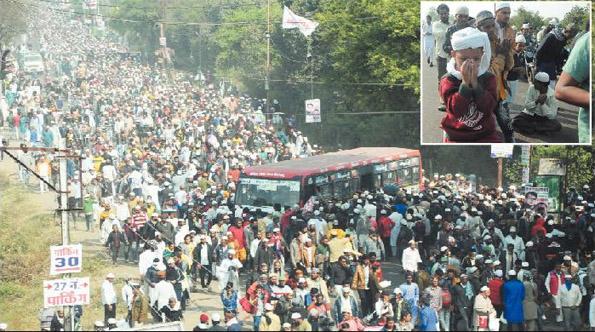 73rd Alami Tablighi Ijtema lasting for four days ended with special prayer
Chronicle Reporter, Bhopal
The Ijtima ended on Monday with Dua-e-Khas (special prayer). When Maulana Saad Sahab started praying at 9.28 in the morning after his preaching, lakhs of hands raised together. This special prayer was held for 29 minutes. During this time beseeching of only Maulana Saad and the voices of devotees saying Amen were echoing in the holy atmosphere.
Before Dua, Maulana Saad Sahab delivered sermons till 9.21 am. He said- Today man has limited his needs only for worldly joy. Whereas, real life is about preparing for the afterlife, it does not care. However people are being asked to work hard in real life through Tablighi congregations.
5,000 Jamaats (Group) participated in the ongoing Ijtima at Eitkhedi in the capital Bhopal. More than 10 lakh people gathered here. After the Ijtima was over, a crowd of lakhs left for the railway station and bus stand. Due to this the traffic system has changed. There is no entry for heavy vehicles especially in the old city areas. Ijtima started from 18 November. One thousand Jamaats came on the first day, but in the next 2 days this number increased to 5 thousand. The Jamaats stopped in a big tents setup in an area of 300 acres.

Lakhs of people raised their hands to pray for prosperity of country
O Allah, illuminate the whole world with the light of knowledge. Let the winds of peace, tranquility and brotherhood blow in the whole universe. May this city, state and country be blessed with heights of success and prosperity. Give every person in the world the ease of following truth, honesty and right. Fulfill all the needs of those who participate in the Ijtima, those who arrange it, those who help in its preparation. Please protect all the people from the devastation coming in the whole world.

Some reached since night, some started running since morning
To attend the Dua-e-Khas (special prayer) on Monday, the last day of the 73rd Alami Tablighi Ijtima, the city's race started towards the Ijtima venue located at Eitkhedi. A large number of people had reached since Sunday night itself. On the other hand, the rest reached after the Fajr prayer in the morning.

Communal harmony seen
People of villages including Islam Nagar, Semra Syed, Golkhedi, Lambakheda etc. had made arrangements to save the people who left for their homes from the troubles on the way after prayer. Apart from free drinking water and tea, non-Muslims are also handling traffic arrangements. The people of Hindu society have also provided space in their fields and farms for the parking of Ijtima. Apart from this, many people of Hindu community have also given place for the pipeline to pass through their fields for the line laid to prepare the temporary sewage treatment plant prepared at Ijtima venue.

One of the largest religious congregations in the world
The Alami Tablighi Ijtima held in Bhopal is one of the world's largest religious congregations of the Muslim community. Ijtima is held only in India, Pakistan and Bangladesh. Foreign groups have also been participating in Bhopal's Ijtima, but for the first time this year foreign groups did not come due to precautions for Covid. Jamaats came from all over the country.

Ijtima started in Bhopal in this way
Ijtima is an Arabic word. It means gathering of many people in one place. Ijtima in Bhopal was started in 1947 with just 12 or 14 people in Masjid Shakur Khan located near Malgalwara. After 2 years it started being organised in Tajul Masjid. When the number of people coming in, it started increasing in lakhs and the mosque campus started looking small. Then in the year 2015, it was shifted to Ghasipura near Eitkhedi on Berasia Road. Since then it is being held here. Preparations for this are started 2 months in advance. Large domes, tents and bathrooms, toilets, water-sewage lines and electricity arrangements are made.