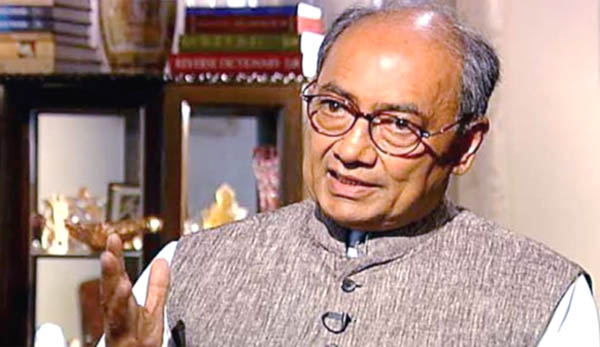 Chronicle Reporter, Bhopal-Former Chief Minister and Rajya Sabha MP Digvijaya Singh wrote a letter to Chief Minister Shivraj Singh Chauhan requesting to free the land of the tribals from possession of land mafia in Budhni assembly constituency and to take action against those who assaulted the tribal people.

He spoke for the reconstruction of the place of Adivasi Lord Badev in the village Mariyado of Ladqui police station area of Budhni, which has been damaged by the miscreants. Digvijay Singh has written that Vinod Irpache and the delegation have visited the Nasrullaganj area as a representative of the Tribal Development Council and met the victims.

On February 13, the village Mariyado and the tribal families in the vicinity went to the village of Bhilai to worship the God Badev. On this day, the people who occupied the land have stopped this family from worshiping by assaulting them. The families of the victims had given information to the Ladqui police post and demanded action against the attackers.

- Did not even allow worship of -Badedev

No action was taken even after written notice to the police. As a result, on the second day, on February 14, when the tribal family reached the shrine again to worship God, many armed men attacked men and women including children. They were stabbed with sticks and iron rods. Also, the religious place where the tribal had been worshiping for years was destroyed. Radhe Lal and Kailash were attacked on head by the mass attack. Also, Devi Singh, Morsingh, Somchand, Mohan Bai, Dullo Bai, Madhusingh suffered serious injuries. All the victims have deep wounds in the arms, legs and head. The attackers still receiving political patronage and are still absconding and are threatening to kill the complainants.