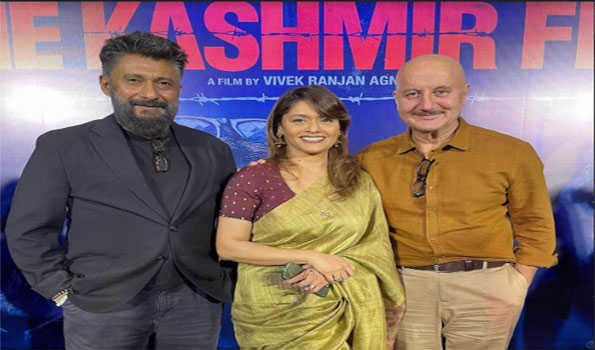 "We were always aware that there are elements that would not like to see the stark truth on the screen, but it is very unfortunate that a creative platform was used for a 'political agenda' to preserve an old, false and jaded narrative about Kashmir," Pallavi said in a statement.

She added: "For decades the international community remained silent on the sufferings of the Kashmiri Pandit community. After three decades, the Indian film Industry finally realised that it needs to tell India's story truthfully and objectively. We are overwhelmed by the way people of India rose to defend 'The Kashmir Files' against the rude and vulgar statements of a genocide denier."

She assured the audience and supporters that "The Kashmir Files" remains a "people's" film.

Pallavi expressed her gratitude to Israeli Ambassador to India Naor Gilon for slamming Lapid for calling the movie 'propaganda and vulgar movie' at the closing ceremony of International Film Festival of India (IFFI) in Goa.

Agnihotri, in a veiled attack on the Israeli filmmaker, tweeted: "Truth is the most dangerous thing. It can make people lie."

Kher tweeted: "The truth of 'The Kashmir Files' is stuck like a thorn in the throat of some people. They are neither able to swallow it nor spit it out! Our film has become a movement."

Earlier, Gilon slammed Lapid: "You should be ashamed. The friendship between the people and the states of India and Israel is very strong and will survive the damage you have inflicted.

"As a human being I feel ashamed and want to apologize to our hosts for the bad manner in which we repaid them for their generosity and friendship," he said.