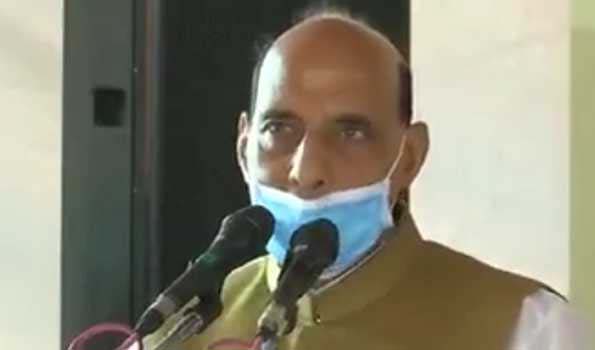 Lucknow, Jul 21(UNI) Defence Minister Rajnath Singh on Wednesday dedicated 12-and-a half feet bronze statue of BJP leader and former Governor of Madhya Pradesh Late Lalji Tandon.
Several dignitaries, including Chief Minister Yogi Adityanath, Deputy Chief Minister Dr Dinesh Sharma, Mayor Sanyukta Bhatia were present on this occasion held at Hazratganj area of the state capital.
Mr Singh, MP from Lucknow, said that Lalji Tandon had a done lot for Lucknow and would be remembered for the affection for the city and its people.
On the occasion, the Chief Minister said," I pay humble tributes to Lalji Tandon. Thanks to the Municipal Board and the Mayor for unveiling the statue of Lalji Tandon."
The Chief Minister said that Tandon started his political journey as a councilor of the Municipal Corporation. He was the Governor of Bihar and Madhya Pradesh. He had fans in every section of society. The people of Lucknow also gave him full affection. His son Ashutosh Tandon alias Gopalji is working to carry forward his legacy.