Laver Cup: Federer to team up with Nadal for farewell match 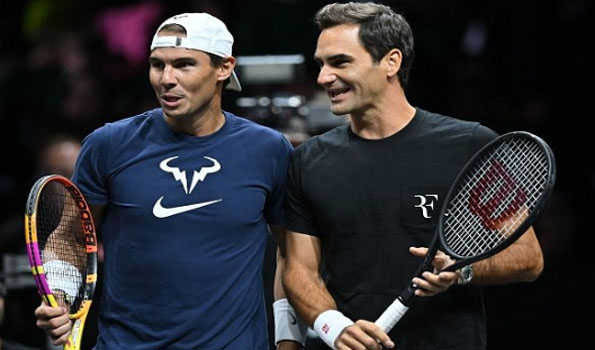 London, (UNI) Roger Federer will team with longtime rival and friend Rafael Nadal on Friday at the Laver Cup in what the former World No. 1 would be his final tour-level match.

Taking to twitter on Thursday, the Swiss star said: "Tomorrow night. My last match. Doubles with @RafaelNadal." Reacting to Federer's tweet, Nadal tweeted, "An honor and a real pleasure @rogerfederer."

The Swiss and Spaniard will take to court against Jack Sock and Frances Tiafoe at The 02 here.

Last week, the 103 tour-level titlist and the 20-time Grand Slam winner , Federer, announced that the Laver Cup will be the final tournament of his career.

"I am not sure if I will be able to handle it all but I will try,” Federer said during Team Europe’s press conference. “I’ve had some tough moments in the past, being horribly nervous. All these years. This match feels a whole lot different. Playing with Rafa feels really different."

"To be part of this historic moment is amazing and unforgettable for me,” Nadal said during the press conference. “I am super excited and I hope I can play at a good level. Hopefully, together we can create a good moment and hopefully win a match."

Laver Cup, the three-day event, which starts on Friday, sees Team Europe face Team World in a series of singles and doubles matches.