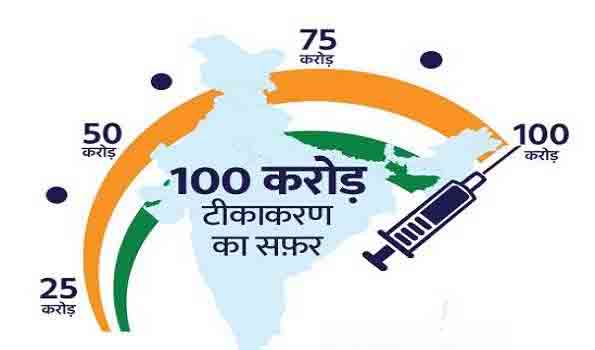 New Delhi Oct 21 (UNI) As India reached the 100 crore mark of the COVID-19 vaccination programme in the country, ministers and leaders of various political parties congratulated the people and the frontlines' work on achieving this milestone, here on Thursday.

Talking to Twitter, Union Home Minister, Amit Shah congratulated Prime Minister Narendra Modi and the nation as a whole for this achievement.

“I congratulate the entire nation on this historic achievement. I thank all the scientists, researchers, and health workers who have contributed to this Mahayagya by overcoming many challenges and congratulate Modi ji who is determined for the safety and health of every person. Jai Hind! #vaccinecentury,” he tweeted.

BJP President JP Nadda also congratulated the country on achieving this milestone and said India is showing amazing potential in a time of tough struggle.

“India has achieved the target of 100 crore COVID vaccinations in less than 10 months, showing amazing potential in the time of tough struggle. This is an unprecedented achievement in the field of health as well as a symbol of India's potential on the world stage.”

Union Minister for Road Transport and Highways Nitin Gadkari said, "The world's largest vaccination campaign under the leadership of Prime Minister Shri Narendra Modi has set a new record in the history of the world by completing 100 crore vaccinations today”.

Union Minister for Civil Aviation, Jyotiraditya M Scindia said in a tweet that, “And we hit a century! 100 crore vaccinations completed in merely 9 months despite: - The challenges of being the second-most populous country. - Vaccine hesitancy promoted by leaders without foresight and the mishandling on the part of some state governments”.

Delhi Chief Minister Arvind Kejriwal also extended his wishes to all the health workers on Thursday.

In his message on Twitter he said, “Congratulations to all the countrymen on vaccinating 100 crore people. Salute to the doctors, nurses, and frontline workers who made this possible. All of us countrymen together faced this disease. Together we will defeat this forever.”