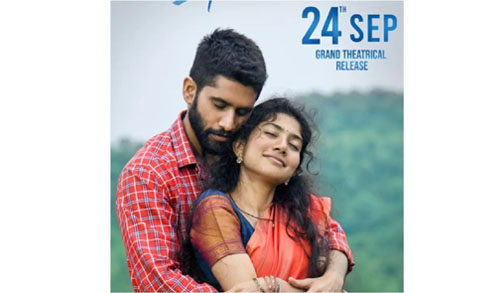 Title: Love Story
Cast: Naga Chaitanya, Sai Pallavi and others
Director: Sekhar Kammula
Rating: 3/5
When 'Love Story' begins with a voice saying that love attains glory after struggling through a stream of conflicts and ordeals, we sense that director Teja, who made rebellious love stories such as 'Nuvvu Nenu' and 'Jayam' in the early 2000s, may just have possessed Sekhar Kammula's body for once. By and by, we are relieved to see Kammula retaining the soul of his style of filmmaking with conviction. This despite the fact that the story has an element that is so very un-Kammula-esque insofar as Revanth (Naga Chaitanya) and Mounica (Sai Pallavi) stage a subversion that at once feels both inevitable and courageous.
Revanth is a struggling Zumba instructor who fortuitously gets Mounica, a natural dancing talent, as his neighbour in Hyderabad. They take their sweet time to collaborate on their fitness business, but once they get going, they hit the bull's eye in no time. Love blossoms. But gender and caste issues surface in unpredictable ways.
In an apparently not-so-crucial scene, we hear Mounica say that girls nowadays don't mind the caste of the man they like. She adds that all that matters is whether he is good-natured and has a good job. The line defines the spirit of the film, especially given that the Mounica-Revanth duo have to stake their career as well in their tempestuous journey.
The love story is not staged in a cliched manner. As a middle-class person from a small town, Revanth has to move heaven and earth to be able to pay rent for his fitness center in Hyderabad. On her part, Mounica is a mediocre graduate who doesn't mind landing a corporate job through unscrupulous means. She suffers from anxiety issues, a psychological issue that is explained in the later portions of the movie.
Revanth and Co. are facing existential crisis and his mother is petrified into talking about the albatross of caste chasing them everywhere. Mounica makes a heart-wrenching revelation. It's these sensibilities that deepen 'Love Story', which would have been a cliched take on casteism and abuse in the hands of an ordinary filmmaker. Only recently, we have seen 'Sridevi Soda Center' bungling it up with mundane characterizations and old-school situations. 'Love Story' is in a territory where the tribulations are introduced after the audience is allowed the luxury of understanding the aspirations and stark realities of the lead pair.
Debutant composer Pawan Ch scores full marks with 'Nee Chitram Chusi' and 'Ay Pilla'. The placement of 'Saranga Dariya', one of the biggest hits in recent times, is gutsy. Sai Pallavi is remarkable as a job aspirant who goes on to become a pillar of strength in Revanth's life. Her chemistry with Naga Chaitanya is perhaps the biggest asset of the film. Vijay C Kumar's cinematography is worthy, while Uttej brings the charm of yesteryear character artists to the table.
At more than 150 minutes, the film has serious pacing issues. Rajeev Kanakala, who plays Mounica's babai, gets a stereotypical characterization. The way the lead pair's fitness center turns a corner in a snap is the stuff of escapist cinema.