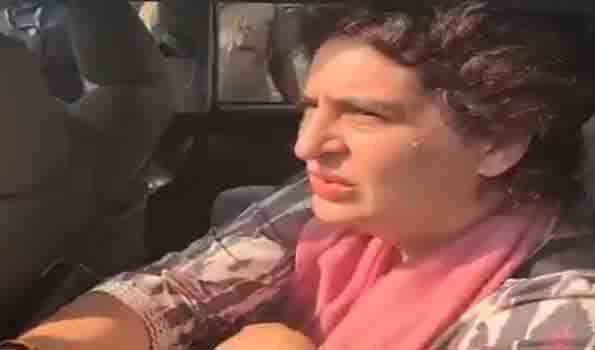 Lucknow, Oct 20 (UNI) Congress General Secretary Priyanka Gandhi Vadra was detained by Lucknow Police on the Lucknow- Agra expressway on Wednesday when she was going to Agra to meet the family members of Arun Valmiki who died in police custody.
Police said Priyanka was taken into custody and was brought to police lines after she showed adamancy to go to Agra.
After her detentionn, Priyanka tweeted " Arun Valmiki died in police custody. His family is seeking justice. I want to visit family. What is the UP government afraid of? Why am I being stopped?."
" Today is Lord Valmiki Jayanti, PM spoke big on Mahatma Buddha, but is contradicting his own messages," she added.
Earlier Priyanka said she is going to Agra to meet the mother and family members of Arun Valmiki, who died in police custody.
Earlier , Priyanka twitted on Wednesday," Where is the justice to beat someone to death in police custody?."
She further said ," the incident of Arun Valmiki's death in Agra Police Custody is condemnable. On the day of Lord Valmiki Jayanti, the UP government has acted against his messages."
She also demanded," High level investigation and action should be taken against the policemen and the victim's family should get compensation"