Lumpy virus outbreak in MP, over 100 cows succumb so far 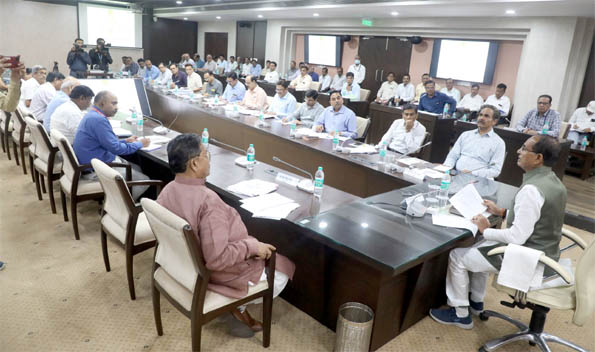 Chronicle Reporter, Bhopal
Chief Minister Shivraj Singh Chouhan today announced free vaccination of animals in the state amid rising outbreak of Lumpi virus.
Shri Chouhan said this while addressing a high level meeting regarding this virus.
Earlier, while addressing the meeting, he said that till date the number of animals affected by it is seven thousand 686. The number of dead animals due to the virus is 101 and the number of animals recovering is five thousand 432.
He said that lumpy virus is a virus like Covid in animals and the same battle will have to be fought against it as it was fought against Covid. This virus needs to be taken very seriously.
He said that the cow-sevaks, public representatives and the rest of the society, all together have to stop this disease. We will consider the causal works. He said that after that he would issue an appeal to the public to be careful in this matter. Now it has spread to 26 districts, so there is a need to be very cautious.
Shri Chouhan said that it needs to be taken very seriously. The way cows and other animals died in neighboring states, such scenes have come to the fore, at any cost we should not allow that situation to arise.
He said that it is similar to Covid in animals in a way. It is an infectious disease spread by flies, mosquitoes, interbreeding, living together. There is a serious concern about this.
In the meeting, the Chief Minister said that information about all measures should be given to the cattle owners, and inform them by calling the Gram Sabha. Vaccination should be done in Gaushalas. Be aware of the virus. The movement of infected animals should be restricted.
The main symptoms of this disease are mild fever in the infected animal, excessive salivation from the mouth and watery eyes and nose, swelling of the lymph nodes and legs and decline in milk production, abortion in pregnant animals and sometimes death of animals. A large number of lumps of size 02 to 05 cm are to be formed in the skin on the body.
For its prevention, keeping the infected animal / herd of animals separate from healthy animals, destroying parasitic insects, mites, flies, mosquitoes etc. of animals with insecticides and antivirals, keeping the animal's housing- enclosure clean, from the infected area. Measures such as stopping the movement of animals to other areas, getting treatment from a veterinarian immediately after the symptoms of the disease and stopping the animal market, organizing fairs and buying and selling of animals etc. Apart from this, vaccination of healthy animals is also necessary.
Animal Husbandry and Dairying Department, Madhya Pradesh is keeping special vigilance by issuing alerts for prevention and control of diseases in the state. Intensive vaccination and medical work of animals is being done in infected areas and districts.
If symptoms of lumpy skin disease are seen in animals, it is necessary to contact the nearest veterinary dispensary, veterinary hospital.
On the instructions of Chief Minister Shri Chouhan, telephone numbers of the State Level Disease Control Room were issued in Bhopal. Concerned livestock owners can contact on 0755-2767583 or toll free number 1962.

CM’s instructions
* - Take the lumpy virus seriously. It is a contagious disease of serious nature. It is not to be taken lightly. Our duty is to put an end to this.
* - Inform the livestock owners about the necessary measures for the control of the virus, and also inform by calling the Gram Sabha.
* - Vaccination of cows should be done in gaushalas. Vaccination of other animals should also be done.
* - Restrict the movement of animals from the villages of infected animals to other places.
* - To ensure that the disease does not spread, all precautions should be taken.