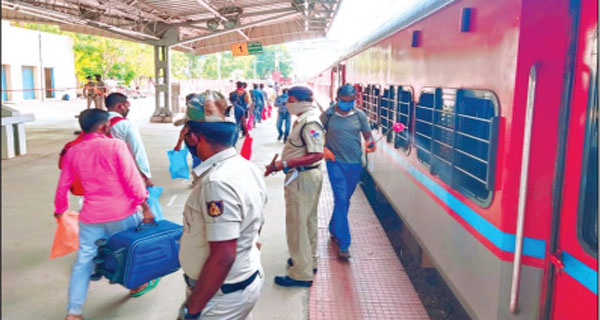 Amid reports of desperate migrant workers continuing to walk back home despite a ban, the Union Ministry of Home Affairs (MHA) on Tuesday issued a revised Standard Operative Procedures (SoPs) for their smooth transportation.

Under the revised SoPs, the Ministry of Railways (MoR) would permit movement of Shramik Special trains in consultation with MHA and all states and Union Territories (UTs) need to designate nodal authorities and make necessary arrangements for receiving and sending such stranded persons. “Based on the requirements of states, the train schedule, including stoppages and destination would be finalized by MoR.

The same would be communicated by MoR to the States/UTs for making suitable arrangements for sending and receiving such stranded workers”, the SoP reads. Under the revised norms, the publicity of train schedule, protocols for entry and movement of passengers, services to be provided in coaches, and arrangements with states or UTs for booking of tickets would be done by MoR.

The guidelines also emphasized that the sending States or UTs and MoR would ensure that all passengers are compulsorily screened and only asymptomatic passengers are allowed to board the train. While the social distancing to be observed by all passengers during boarding and travel,on arrival at their destination, the travelling passengers will have to adhere to such health protocols as are prescribed by the destination state or UT.

Despite the fact that the MHA had issued Standard Operative Protocols for the movement of migrant workers by trains on May 11, these stranded people were continued to walk on foot to reach their native places and many of them have died in road accidents during their journey. Meanwhile, to mitigate the distress of migrant workers returning to their native places on foot, the Centre has sought more proactive coordination among the states and Railways for smooth transportation of migrants to their homes.