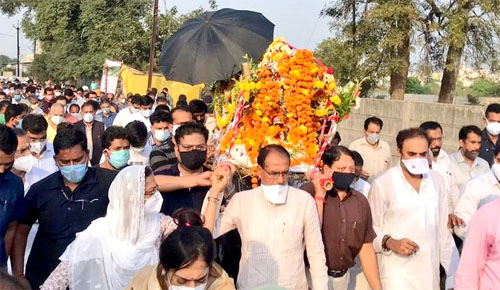 “The most significant aspect of his personality was the sheer absence of even a vestige of arrogance. He remained faithful to all, while leading a sincere and pure existence. Indeed, till his very last breath, his graceful countenance reflected gentility, simplicity and calmness.

Prior to commencement of my fourth tenure as Chief Minister, Babuji visited Bhopal and often discussed issues with me despite not being in the pink of health. He championed nationalist ideology and was active even at the age of 88! Despite being wheelchair-bound, he participated in the recent Deepawali puja. Babuji had a special identity. I pray for peace to the departed soul,” the senior politician averred.

The Chief Minister, his spouse Sadhana and other relatives reached Gondia this morning. Mr Masani’s mortal remains were conveyed there by air ambulance and the funeral conducted at Gondia Pindkepar. Locals, social workers and officials in large number were present. They included Inspector General of Police (Balaghat Range) KP Venkateswara Rao, the Collector and the Police Superintendent.