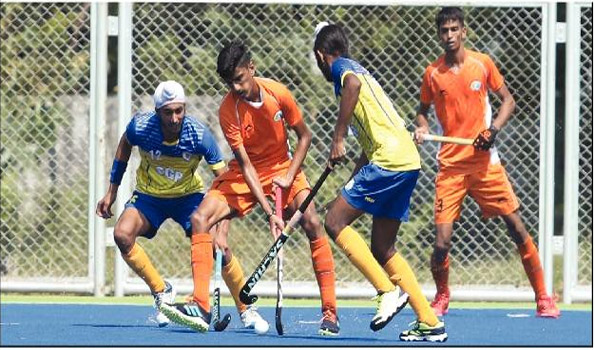 Chronicle Reporter, Bhopal
In the first Sub Junior Boys Academy National Hockey Championship-2021 being played in Bhopal, Madhya Pradesh Hockey Academy continued its winning streak and entered the title match. In the second semifinal, Odisha Naval Tata Hockey High Performance Center defeated Roundglass Punjab Hockey Academy to make it to the final. The championship matches are being played on the turf ground at Sai Center Village Gora. Sports and Youth Welfare Minister Hon. Yashodhara Raje Scindia has congratulated the team of MP Hockey Academy for reaching the finals. He said that the performance of the team has been excellent. Best wishes to coach Sameer Dad and the entire team for the final match.
MP Hockey Academy defeated SGPC Hockey Academy 3-1 in the semifinal. This is also the fourth consecutive win in the championship of MP Hockey Academy. The players of MP Hockey Academy maintained an aggressive approach from the first quarter itself. In the 12th minute of the match, MP Hockey Academy got a penalty corner. Saddam Ahmed converted it into a goal to give the team a 1-0 lead. The answer of the SGPC team was also looking for the spot. However, their attacks were foiled by MP Hockey Academy's defense and goalkeeper Aman Khan. The second quarter of the match was very exciting. Both teams scored goals against each other. SGPC got an equal opportunity in the 21st minute of the match.

Joban Singh scored equalizer: Joban Singh scored a field goal to level the match at 1-1. However, after 4 minutes, MP Hockey Academy got a penalty corner. Jamir Mohammad made no mistake and scored a goal to take the team to a 2-1 lead. The SGPC team once again came under pressure.