MP among top 6 states in India in child marriage 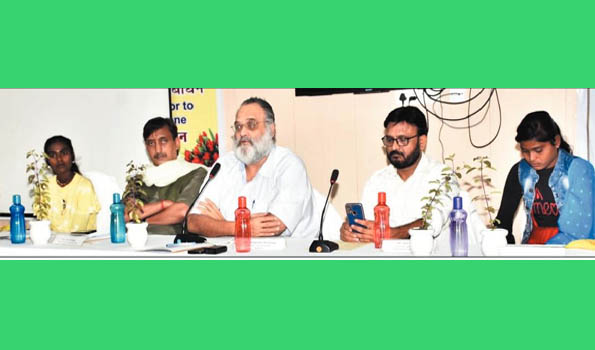 Chronicle Reporter, Bhopal
Madhya Pradesh figures as the 6th state in India in child marriages, according to Census 2011, around 891,811 children fell victims to child marriage in Madhya Pradesh. In order to stop the rising cases of child marriage in the state, Nobel Peace Laureate Kailash Satyarthi’s Children’s Foundation (KSCF) announced their upcoming “Child Marriage Free India” campaign in Bhopal today. A state consultation in this regard was held to mobilise all stakeholders of child protection to move together and help in the realisation of Child Marriage-Free India. KSCF co-organised the consultation with the Department of Women & Child Development (WCD) of Madhya Pradesh.
At the state-level consultation the key points discussed were appointment of Child Marriage Prohibition Officer (CMPO), mandatory FIR registration in cases of child marriage and incentivization of parents to motivate them to not marry their under-age children.

24 pc women married before 18
The National Family Health Survey-V (NFHS 2019-21) reports that nationally 23.3% women between the age group of 20-24 were married off before attaining the age of 18. In this context, it is important to highlight the status of child marriage in Madhya Pradesh, according to Census 2011, the state constituted approximately 7% of all married children in the country. However, National Crime Records Bureau (NCRB) data of 2021 suggests that cases of only 13 children were registered in the state under the Prohibition of Child Marriage Act (PCMA) during 2019-21. Which means there is gross under-reporting of the child marriages in the state.

Complex issue
Terming child marriage as a complex issue, joint director, WCD, Suresh Tomar said, “Child marriage is looked as part of the social custom and makes it difficult for law enforcement agencies to tackle the issue. All stakeholders must come together and work collectively to tackle the growing menace in our society.”

Adverse impacts
Highlighting the adverse impact of child marriage on children and why we must act to stop the social evil, Rakesh Senger, executive director of KSCF said, “Child marriage is an evil in our society and should be looked as a crime against children. It hinders the complete development of children. In this regard, our organization under the leadership of Kailash Satyarthi will work closely with the state government, law enforcement agencies and civil society groups towards a child-marriage free Madhya Pradesh”.