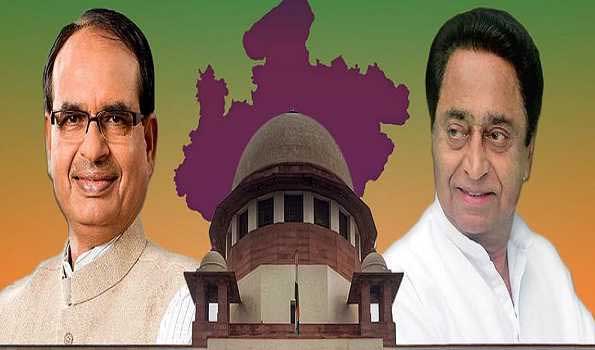 New Delhi, The Supreme Court on Wednesday heard Bharatiya Janata Party petitions, including one filed by Shivraj Singh Chouhan, seeking an immediate floor test in the state of Madhya Pradesh, where the Kamal Nath government is said to have lost majority in the 230-member Legislative Assembly after the rebellion of Gwalior royal Jyotiraditya Scindia and his supporters.The hearing will resume on Thursday at 1030 hrs.A bench, headed by Justice D Y Chandrachud, listened arguments and submissions from Dr Abhishek Manu Singhvi for state speaker and Mukul Rohatgi for BJP and senior advocate Dushyant Dave, for Indian National Congress.Dave said MLAs are supposed to serve their constituencies and not get up one day to resign.Apex Court said these 16 MLAs have unhindered access to the Assembly and must be free to exercise their choice.The top court said a fixed tenure is not what the Constitution scheme says. Rohatgi argued they want these MLAs to come to Bhopal so that they can do horse trading.