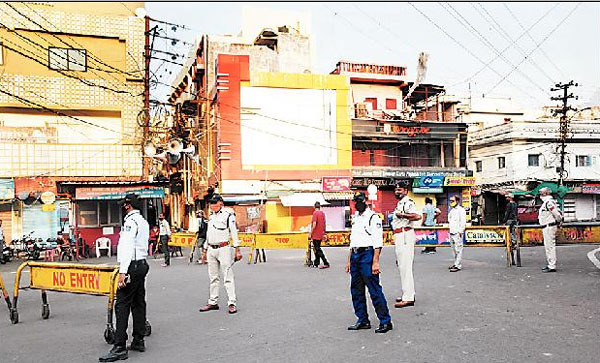 With this, 66 people have died in the state according to official records. The 24-hour recovery rate was 57%, during which 6397 people have recovered. Now more cases are being reported in Bhopal than Indore. Indore was the biggest hotspot in the first wave of Corona. Now more cases are being received from Bhopal in terms of population, as the population of Bhopal is less than Indore. Positivity rate exceeds 21% for the fourth consecutive day
Bhopal and Indore have joined the top 10 most infected cities of the country. Bhopal is also above this list in Indore. In the last 30 days, there have been 7,359 cases per 10 lakh population in Bhopal. The figure is 7,027 in Indore. Bhopal and Indore at number six and seven and Nashik, Nagpur, Pune, Mumbai, Bangalore are the top five most infected cities of the country.
In the state for the fourth consecutive day, the infection rate has been more than 21%. The report of every fourth person is positive. With the death toll from Corona being higher in the four metros, the number of deaths in small towns is now increasing. According to the report of the Health Department, 7 deaths each were recorded in Indore and Jabalpur and 5 in Gwalior. There Four people each died in Jhabua and Vidisha and 3 each in Betul, Ujjain, Rajgarh and Ratlam. So far, the death toll from Corona in the state has been 4491.

Active cases above 63000
The pace of active cases is also increasing rapidly in the state. The total active cases in the state are 63 thousand 889. In such a situation, the biggest challenge before the government is to arrange for the treatment of patients. This number is expected to reach one lakh by the end of April. The government has claimed that 1 lakh beds are being arranged in all cities.
Meanwhile, despite being close to Maharashtra border, Corona has been controlled effectively in Burhanpur. In Chhindwara district, the positivity rate has been reduced to 9.73 percent, which was quite high earlier.
As many as 75 new cases have come up while 185 patients have been cured. The positivity rate of Dewas is 6.91 percent, 35 new patients have come up here while 165 patients have been cured.
In terms of infection, Madhya Pradesh stands sixth in the country. 68 percent of active patients are in home isolation and 32 percent are in hospitals.
CM Shivraj Singh Chouhan has said there is sufficient availability of oxygen and Remdesivir injection in the state. 20 thousand injections are being received from the SUN Pharma Company. An order of 50,000 injections has been given to Mylan company. One lakh injections more are being ordered.
Chief Minister Chouhan also spoke to Union Minister of Fertilizers and Chemicals Sadanand Gowda during the video conference for the availability of Remdesivir injection. Gowda assured that adequate number of injections will be provided to Madhya Pradesh.