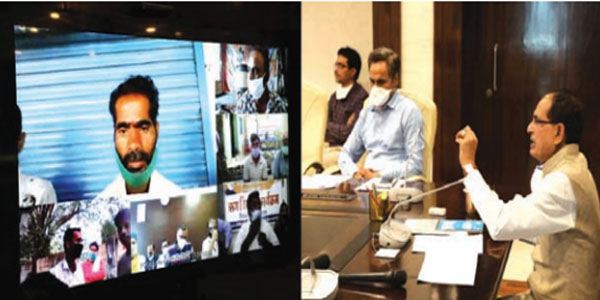 The Chief Minister Shivraj Singh Chouhan has said that Corona pandemic has affected the street vendors involved in small business the most but the state government stands beside them.

Madhya Pradesh tops in implementing the Pradhan Mantri Street Vendors Atma Nirbhar Nidhi (P.M. Swa Nidhi) scheme, which is being implemented in the state to help the street vendors to continue their business and to increase it. Chouhan said that maximum benefit of the scheme will be given to small businessmen like vegetable vendors, people running chaat shops and related to tailoring works besides tea sellers in the state, so that all these can be saved from the burden of interest and can conduct their business smoothly for the sustenance of their families.

The Chief Minister Chouhan said that under the scheme, the process of providing identity cards to all registered street vendors in the state should be completed. He said that the scheme will be reviewed constantly. Apart from urban street vendors, a scheme to provide interest free assistance of Rs. 10 thousand is being implemented for the street vendors of rural areas of the state.

On timely repayment of the loan, double amount i.e. Rs. 20 thousand will be sanctioned next year. The Chief Minister Chouhan further said that many times, a person engaged in small business spent all his life time in paying off the debt. Under this scheme, the beneficiary will have a facility to repay the loan in one year and business of everyone will get boost because of the loan without interest. The government will take the loan guarantee. Many businessmen who had shut down the business will now be able to restart their business.