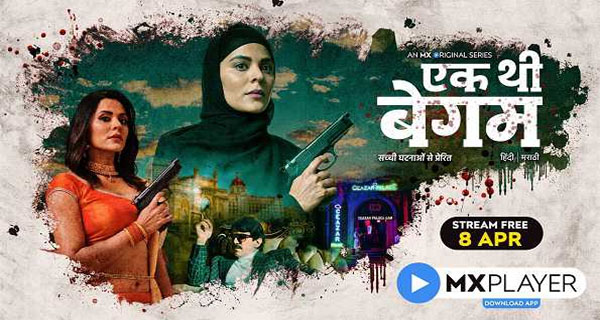 Entertainment streaming platform MX Player recently went live with ‘Ek thi Begum’, tracing the life of a gutsy woman who took it upon herself to avenge her husband’s death and challenged the biggest underworld don of their time.

To bring alive her journey, struggles and emotions, the platform has roped in two of the most revered singers in the country – Sunidhi Chauhan and Javed Ali – for two of the songs in the show ‘Rab Kyun Khafa’ and ‘Chaubhati Hai Tanhaiya’ respectively.

Talking about the song ‘Chaubhati Hai Tanhaiya’, sung by the melodious Javed Ali, director Sachin Darekar shared saying, “The song ‘Chubhati Hai Tanhaiya’ talks about the memories that you shared with your loved ones, your closed ones. It’s a song that emotes the feeling of love and overlaps it with the hardships and the loss, as well. It’s a beautiful song created by Amitraj and sung so well by Javed.”

On ‘Rab Kyun Khafa’ he added, “What really touched my heart about this song was its lyrics. It’s touching and mournful at the same time and I couldn’t imagine anyone but Sunidhi who could bring it to life.”

‘Ek Thi Begum’ is a revenge drama that chronicles the life of a beautiful, gutsy woman Ashraf Bhatkar aka Sapna (played by Anuja Sathe). Life as she knew it changed when the city’s biggest don Maqsood (Ajay Gehi) turned responsible for the death of her husband Zaheer (Ankit Mohan).

Inspired by true events, MX Player brings viewers the story of begum Ashraf aka Sapna who turned femme fatale and vowed to avenge her beloved’s killer.