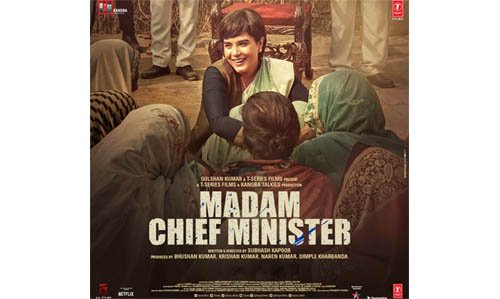 After intriguing teaser posters, the makers of Richa Chadha starrer ‘Madam Chief Minister’ have unveiled the trailer of the gut shaking political drama written & directed by Subhash Kapoor. The film will showcase Richa Chadha as a figure of power and dignity alongside talented performers like Saurabh Shukla, Manav Kaul, Akshay Oberoi and Shubhrajyoti.

The film is about the story of a young woman’s journey and growth in the world of politics, a leader like never seen before, an unstoppable force. The trailer gives a vibe of an intense political drama ending with a powerful dialogue by the protagonist Richa Chadha, “Tumhari Awaaz uthane se, Tumhari seva karne se, Duniya ki koi takaat nahi rok sakti”, this indeed makes it even more intriguing. The film's plotline revolves around a young woman who takes the power into her own hand and changes the political scenario by becoming Chief Minister. Her life changes after she enters into the arduous world of politics.

Madam Chief Minister is a political drama film directed by Subhash Kapoor and produced by A Kangra Talkies production, Bhushan Kumar, Krishan Kumar, Naren Kumar & Dimple Kharbanda. The film stars Richa Chadha in the titular role and Manav Kaul, Akshay Oberoi and Saurabh Shukla. The film was shot in Lucknow all through November and December in a straight start to finish a 40-day schedule. The film is scheduled for theatrical release on January 22, 2021.