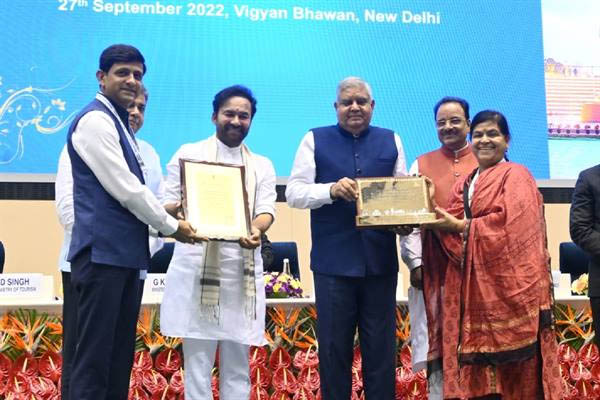 Bhopal : In the Announcement of the National Tourism Awards 2018-19, Honourable Tourism Minister Sushri Usha Thakur received numerous awards on the behalf of the state. The National Tourism Awards 2018-19 was organized by the Union Ministry of Tourism in New Delhi on the occasion of World Tourism Day, and once again the flag of Madhya Pradesh is flying high after receiving 8 National Awards.

Minister Sushri. Thakur said that it is a proud moment for Madhya Pradesh to receive the award from the Ministry of Tourism. She said, under the guidance of Chief Minister Shri Shivraj Singh Chouhan, the state has made innovations in tourism which will continue in the future also. This award is the result of the hard work of all the officers and employees of the tourism department.

Principal Secretary Shri Shukla said that the National Tourism Award will act as an inspiration for all of us. Work has already been started in the state on the theme of World Tourism Day 2022 'Re-thinking tourism'. Tourism facilities and services are being expanded in the state with the concept of Sabka Sahyog aur Sabka Vikas by strengthening the local community.

Devi Ahilya Bai Airport, Indore has received this award for the third year in a row for 'Best Airport-Rest of India'.

Received 'Excellence in Publishing-Hindi' award for Bhitti Chitra of Malwa. Earlier this honor has been received for the Simhastha brochure in 2015-16.

Bhopal Brochure has received award for 'Best Tourism Promotion Publicity Material'. Earlier this honor has been received for Lonely Planet Pocket Books in 2017-18 and Corporate Brochure of MPSTDC in 2010-11.

Subhash Bhavre of Pench Tiger Reserve has received the award for 'Best Wildlife Guide, Western-Central'. Manoj Kumar Dwivedi from Panna in 2017-18, Radhika Prasad Omre from Panna in 2016-17 and Saeb Khan from Satpura in 2015-16 have received this award.

The state has received awards for the first time in the categories “Clean Tourism Place – Western Region” (Ujjain) and “Incredible India Bed and Breakfast Establishment Approved by State Government” (Courtyard Homestay, Madla). Guides of Madhya Pradesh has been honoured for the fourth time in a row for 'Best Wildlife Guide'.