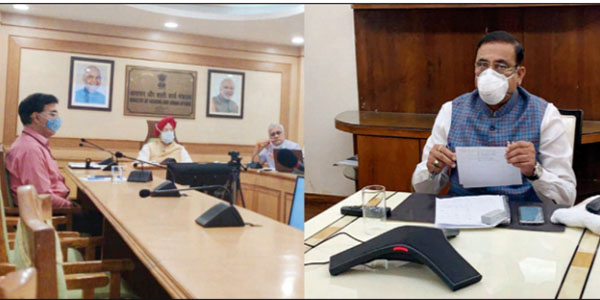 Madhya Pradesh tops in the country in Pradhan Mantri Street Vendors Atma-Nirbhar (PM Swa-Nidhi) Scheme. Minister for Urban Development and Housing Bhupendra Singh has informed that interest free loan of Rs. 10 thousand has been sanctioned so far to 58 thousand 476 street vendors in the state. This is more than 47 percent of the total sanctioned cases of the country.

He further said that by the end of August, loan will be sanctioned to over One lakh street vendors. Singh gave this information during the review of PM Swa-Nidhi Scheme conducted by the Union Minister of State (Independent Charge) for Housing and Urban Affairs Hardeep S. Puri through video conferencing. Ministers and Officers of all States and Union Territories attended the review meeting.

Puri lauded the works being undertaken by the Madhya Pradesh Government under the PM Swa-Nidhi Scheme. Minister for Urban Development and Housing Singh informed in the video conferencing that 8 lakh 78 thousand street vendors have been registered in 378 civic bodies. Out of this, more than 4 lakh 37 thousand applications have been verified. Identity cards to 3 lakh 77 thousand street vendors have already been distributed.

More than One lakh 70 thousand cases have already been sent to various banks for sanctioning of loans. Singh said that better work is being done in Madhya Pradesh under the scheme. Housing and Urban Affairs Secretary and Home Secretary of the Centre also expressed their views in the review meeting.