Mahakal Complex will be known as ‘Mahakal Lok’ 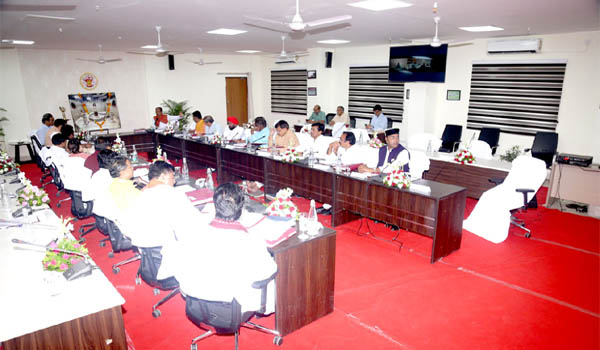 Chronicle Reporter, Bhopal
In his address to the ministers, before the Cabinet meeting in Ujjain today, Chief Minister Shri Shivraj Singh Chouhan said that many works have been completed for the convenience of tourists and devotees in the Mahakal complex. It is a matter of pride for us that Prime Minister Shri Narendra Modi will inaugurate the first phase on October 11. Attractive beautification of the entire area of ??Mahakal complex has been done.

Rudra Sagar revived
Rudra Sagar has been revived. While apprising the ministers about the works of the Mahakal Complex project, Chouhan said that after the last Simhastha, the idea came to mind that the Mahakal complex should be extensively developed. For this, a plan was made for the expansion of the campus in the year 2017 with the help of all the sections. In the first phase of campus expansion, works worth Rs 351 crore have been completed. Work worth Rs 310 crore 22 lakh will be done for the second phase. Today our first decision is that the Mahakal complex will be known as ‘Mahakal Lok’.
Chouhan, while bowing at the feet of Mahakal Maharaj, prayed for the welfare of the country, the state, everyone’s happiness and health and well-being of all. Chouhan said that Mahakal Maharaj is the king of Ujjain and we are Sevaks. As Sevaks, we are praying to Mahakal Maharaj after a meeting today in the city, that his grace and blessings be with all of us.

Mahakal police band
Chief Minister Chouhan said that in Ujjain, the Sawari of Mahakal Maharaj goes out with a police band. We will start Mahakal Police Band, which will be used on various festivals. For this 36 new posts will be created.
Chouhan said that we have decided on two phases for the expansion of Mahakal campus, the first phase was of Rs 351 crore, then we approved Rs 310 crore for the second phase. Many houses were displaced in the work of expansion of the campus. We did the displacement work at a cost of Rs 150 crore. There is a long series of development works. Due to the revival of Rudrasagar, the water of Kshipra river will remain in it. Mahakal path was constructed in the temple with lighting and sound.
Chouhan said that many works are to be completed in the second phase also. Mahakal Maharaj is getting all these works done. He said that along with the progress and development of Madhya Pradesh, for the welfare of the people, we got the idea that meeting should be held in the city of Mahakal Maharaj. CM said that for the first time after nearly 200 years, such an opportunity has come that the government is holding a meeting in Ujjain in the form of Sevak. River front will also be developed on the banks of river Kshipra, which will give a different look to Ujjain.