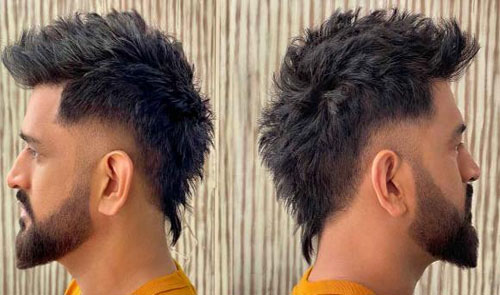 Mahendra Singh Dhoni – it is not just a name but an emotion. The former Indian cricket captain has managed to win millions of hearts with his impressive stint on the cricket ground. In fact, MS Dhoni is also referred to as Captain Cool and had managed to help the Indian cricket team reach new heights. Interestingly, MS Dhoni has not just been a thing on the cricket ground but he has also been a style icon for his massive fan following.
Remember how MS Dhoni had hogged the limelight with his funky Mohawk look in 2013? The haircut became a hot trend among the fans back then. And now, the captain cool is once again making the headlines with his new haircut and has yet again proved why is the ultimate style icon. This time he has got an uber-cool faux-hawk cut along with the razor-sharp beard. Interestingly, MS Dhoni’s new look was shared by celebrity hairstylist Aalim Hakim and it is going viral on social media.
Meanwhile, MS Dhoni had recently made the headlines after he was spotted enjoying a vacation with his family and friends in Himachal. In fact, his wife Sakshi Dhoni had shared beautiful glimpses of their vacation on social media and it grabbed a lot of attention. Talking about the work front, Dhoni will soon be back in action and will be headlining Chennai Super Kings for the fourth IPL trophy in September. Reportedly, IPL will resume with CSK taking on MI in a blockbuster clash on September 19.