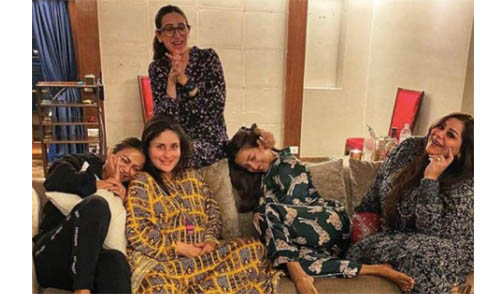 Kareena Kapoor Khan recently celebrated yet another girl’s night with her gang which includes Amrita Arora, Malaika Arora, her sister Karisma Kapoor, and makeup artist Malika Bhat. But this time, the occasion the girls were celebrating was more monumental than their usual hangouts. The group members, all shared the same picture where the gang is seen chilling on the couch with lots of desserts laid out in front of them, with the same caption that said.

While the duo’s caption is a mystery to the unversed, but what we make of this is Kareena Kapoor Khan could be moving out of her apartment building, which is named Fortune Apartments. The move could very well be in light of Bebo’s recent pregnancy with baby number 2. Their current house is shared between Kareena, Saif Ali Khan and their son Taimur Ali Khan.

If you didn’t know, the actress is all set to welcome her second child with Saif Ali Khan this year. They are already the doting parents of Taimur Ali Khan who was born in 2016. The diva will also be seen in Laal Singh Chaddha co-starring Aamir Khan. It happens to be a remake of the 1994 Hollywood drama Forrest Gump featuring Tom Hanks.