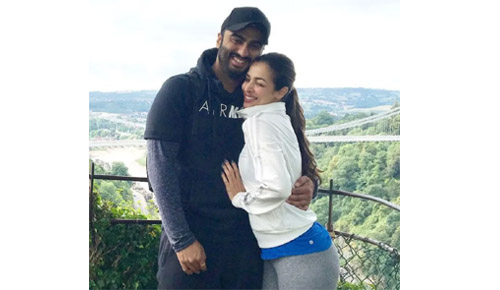 Actor Arjun Kapoor has been in the headlines recently and it is all thanks to the announcement related to his next film, The Lady Killer. On Monday, Arjun surprised everyone by announcing his collab with director Ajay Bahl for a romantic-thriller titled The Lady Killer. He shared the first look poster on social media and well, his girlfriend Malaika Arora was among the first people to cheer for him. Yes, like always, Malaika went ahead and reacted to Arjun's first look from his next film and left netizens in awe.
Taking to her Instagram story, Malaika reposted Arjun's first look as The Lady Killer and expressed her awe for it. In the poster, Arjun is seen in an intense avatar. The tag line of the poster says, "mistrust makes a snake bite its own tail." Malaika shared her beau Arjun's look on her social media handle and wrote, "Wow" on the same. The diva never fails to root for Arjun and his upcoming projects and netizens seem to love this display of appreciation.
Earlier too, when Arjun announced another film Kuttey, Malaika was among the first ones to cheer for him. The couple often leaves netizens in awe of their social media banter and when they step out together, they make heads turn.
Meanwhile, on the work front, while Arjun will be seen in Ajay Bahl's The Lady Killer and Vishal Bhardwaj's Kuttey, Malaika is busy judging the new season of India's Best Dancer with Terence Lewis and Geeta Kapur.