Malaika Arora steps out for yoga despite a rainy Monday, Arbaaz Khan gets snapped in the city 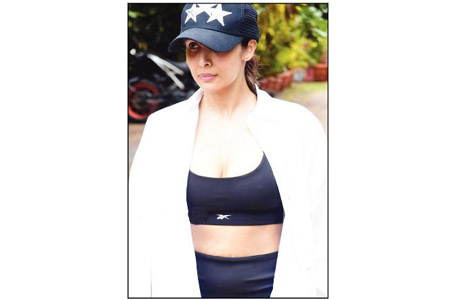 The week began on a rainy note in Mumbai as the monsoons finally arrived. But no rain can stop Malaika Arora from being the fittest version of herself. Despite being a rainy Monday morning, the stylish diva was snapped exiting her yoga studio after her day's session. For the unversed, Malaika not only practices her daily yoga at the studio but also runs it. Several celeb clients are often seen entering and exiting her yoga studio.
Clad in a black workout attire, Malaika threw over a white oversized shirt and donned a black baseball cap as she made her way towards the car. As usual, Malaika acknowledged the paparazzi before exiting in her car.
Meanwhile, the paparazzi also spotted Arbaaz Khan in the city in a rare appearance. The producer and host is rarely spotted. In fact, exes Malaika and Arbaaz are only spotted together when they go to pickup or drop their son Arhaan Khan to the airport.
Recently, Malaika also lost her cool at a fan who kept pestering her for pictures. While Malaika was talking to her friends outside her yoga studio, a fan stood next to her with his phone requesting for selfies. “Kitni PHOTO loge? Abhi abhi toh liya!" an irked Malaika was seen telling the fan. Click the link below to watch the video.