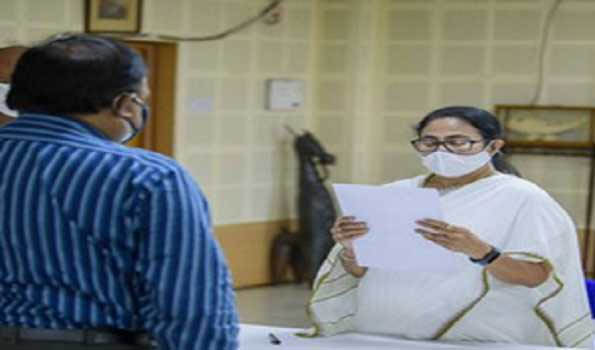 Kolkata, Sep 10 (UNI) West Bengal Chief Minister Mamata Banerjee on Friday filed her nomination papers seeking reelection from Bhawanipur assembly seat in south Kolkata to be held on September 30, while Bharatiya Janata Party has nominated advocate Priyanka Tibrewal to contest against the TMC supremo.
The Chief Minister needs to win the by-poll to remain in office as she was defeated by BJP leader Subhendu Adhikari at Nandigram in the May 2 result,for which election was held in March-April last.
Ms Banerjee arrived at the Survey Buildings at Alipur with her few party colleagues and filed her nomination papers seeking re-election from her home constituency. The 66-year old TMC founder  had fought from the Bhawanipur seat in 2011 and 2016 and won with handsome margins. Left Front nominee and advocate Shreejib Biswas would also contest from Bhawanipur as the CPI(M) candidate.
Earlier in the day the BJP nominated Priyanka Tibrewal, a legal adviser to former Union Minister Babul Supriyo, to contest on behalf of the saffron brigade against the chief minister.
Tibrewal, who has been busy with her legal works , particularly after May 2 following violent incidents and fighting cases for BJP, had also contested in the March-April poll and lost to TMC rival at Moulali in central Kolkata.
BJP also nominated its candidates for Shamshergunj and Jangipur in Murshidabad -Milan Ghosh and Sujit Das respectively.
During March-April elections could not be held in the two Murshidabad seats as the candidates of Congress and RSP died.