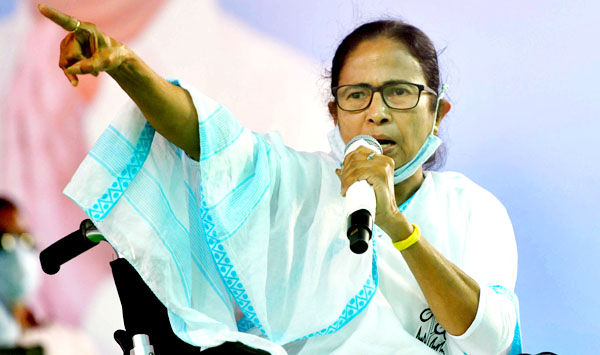 Addressing a public meeting here in Dakshin Dinajpur district, Ms Banerjee asserted that the state would be governed by a “Bengal engine government” and not by “Modi’s double-engine”.

“The second COVID wave is more intense. I would say this is a Modi-made disaster. There are no injections or oxygen. Vaccines and medicines are being shipped abroad even as there is a scarcity of these items in the country,” the TMC supremo said.

The chief minister said that the Centre had said seven months ago that the pandemic has subsided.

"Now, with elections underway in West Bengal, the BJP is bringing in people from other states and spreading the infection among the people here," Ms Banerjee alleged.

The chief minister said the BJP is saying different things at different places on the Citizenship (Amendment) Act or CAA and the National Register of Citizens (NRC).

The TMC supremo said that refugees who have come to West Bengal have been given land rights.

She said in the last 10 years, the state government has built roads, hospitals, bridges, stadium and an industrial centre in Dakshin Dinajpur district.

Earlier on Tuesday at Bhagabangola in Murshidabad district, the chief minister accused the BJP of plotting to instigate “communal riots” and appealed to people to “remain calm and spoil this plan”.

“We should not help them. We have to remember that elections are over in a day but we have to live together 365 days,” she added.

The TMC supremo said that Bengal would not turn into Gujarat.