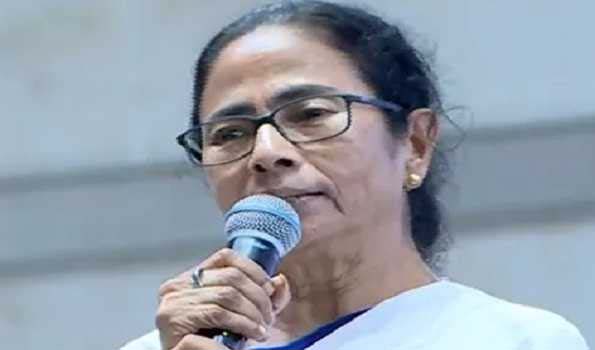 Kolkata, Jul 21 (UNI) West Bengal Chief Minister Mamata Banerjee on Wednesday paid heartfelt tribute to the 13 innocent lives that were lost on this day in 1993.
Taking to her tweeter handle, Ms Banerjee said, “My heartfelt tribute to the 13 innocent lives that were lost on this day in 1993. I urge all my brothers & sisters to join me today at 2PM in a virtual meet to honor the brave souls.
“Our voices against those committing inhumane atrocities shall keep growing louder,” she added. The chief minister will be addressing the Sahid Diwas rally virtually this year, owing to the COVID pandemic.
Trinamool Congress ‘s Sahid Diwas rally is an annual event to commemorate those who lost their lives in the 1993 firing on youth Congress workers.
Ms Banerjee, then West Bengal State President of Youth Congress, had organised Writers` Chalo Abhiyan (march towards Writers` Building) demanding that the voters` identity card be made the only valid document to verify voters in order to put a stop to rampant `scientific rigging`.
The party workers gathered at five different points acrossthe city on that fateful day. They began marching towards their destination along Brabourne Road and were stopped by a large contingent of police officials near the Tea Board office, barely few minutes away from the Writers` Building. The police force started beating up the crowd mercilessly in order to drive them away from the vicinity of Writers` Building.
The Youth Congress supporters who were peacefully rallying refused to stop and walked ahead.
Many rounds of teargas shells were fired but the supporters kept moving forward. Despite Ms Banerjee`s efforts to establish peace, the police went berserk in a spate of revenge and did not  even spare her.
The place transformed into a battle zone. People started running across Curzon Park. The police opened fire, killing 13 supporters and leaving hundreds severely injured. Surprisingly, the police aimed for the heads and the chests of the supporters, something unheard of in any civilized country.
Since then, an annual rally is held on this day every year, dedicated to the memory of these 13 martyrs.