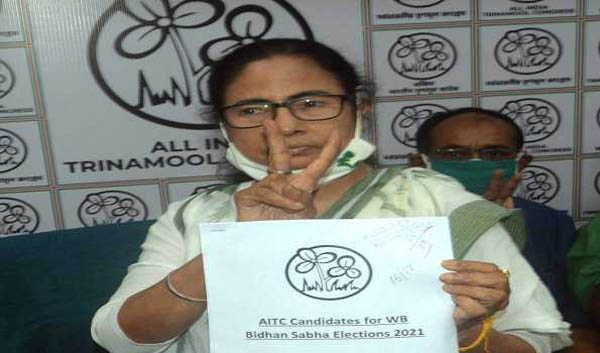 Kolkata, Mar 5 (UNI) West Bengal Chief Minister and Trinamool Congress (TMC) supremo Mamata Banerjee will be contesting from the high-profile Nandigram seat in East Medinipur district.
The ruling Trinamool Congress on Friday released the list of 291 candidates for the coming West Bengal Assembly polls.
Ms Banerjee said she would fight only from the Nandigram assembly seat in East Medinipur.
'I will fight from Nandigram, I will vacate Bhowanipore,' the TMC supremo said.She said her party would contest in the 291 seats and their friendly party (GJM headed by Bimal Gurung) to contest in the remaining three seats of Darjeeling, Kalimpong and Kurseong Assembly polls.“On 3 seats of north Bengal, we are not putting up our candidates,” Ms Banerjee said. The TMC has left these seats for allies and friends to contest from North Bengal and other regions.
No candidate above 80 will contest from the Trinamool Congress, the TMC supremo announced. Among the 291 candidates, which includes 50 women, 42 Muslim, 79 scheduled caste (SC), and 17 Scheduled Tribe (ST) candidates, Ms Banerjee said.
“I have given importance to young people this time while choosing the name of candidates. They all are young people," she said. The Trinamool Congress is fighting the elections on the theme of ‘Bangla Nijer Meyekei Chai’ (Bengal wants its own daughter).
The TMC has named Power Minister Sobhandeb Chatterjee as party's candidate from Bhawanipur seat. Mr Chatterjee, a resident of Bhawanipur, would contest the Bhowanipur seat from where Ms Banerjee won in the 2011 and 2016 elections.
Former Trinamool Councilor and Kolkata Municipal Corporation (KMC)'s Member of Mayorin council (MMIC) Debashis Kumar will contest from Rashbihari seat, in place of Mr Chatterjee.
The TMC supremo also fielded actor Kanchan Mallick, who had joined the part a few days back, from Hooghly's Uttarpara; Soham Chakraborty from Chandipur; director Raj Chakraborty from Barrackpore; actress Sayantika from Bankura; actress June Malliah from Midnapore sadar; actress Sayani Ghosh from Asansol south; cricketer Manoj Tiwari from Howrah's Shibpur and Kaushani Mukherjee from Krishnanagar north assembly constituency.
However, senior party leader and incumbent finance minister Amit Mitra's name is missing from the candidates' list. As many as 50 women candidates have been named in the list.
The names of over 20 sitting MLAs and top ministers have been dropped from the list of candidates, however, the TMC supremo said senior and experienced leaders will be accommodated in the Vidhan Parishad which she said will be created after TMC comes to power again.