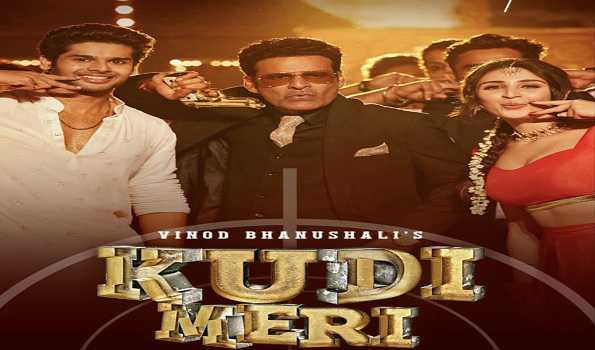 A recreation of the 90s hit 'Sapne Mein Milti Hai', the gangster vibe song directed by Ganesh Acharya, brings back the iconic character of Bhiku Mhatre.

The song recreated by Lijo George and DJ Chetas will definitely make you dance to its beats. Lyrics by Kumaar, Yash Narvekar and Dhvani have given the vocals to the groovy recreated number.

Manoj said, "I was glad when Vinod Bhanushali Ji decided to reinvent this classic song. Everyone has loved and cherished this 'Sapne Mein Milti Hai' and now that they are bringing it back, the newer generations will be able to do the same. The audience has shown a lot of love to Bhiku Mhatre which is why I had a lot of fun while shooting this video. Even though I am not much of a keen dancer it was a fun experience to relive the memories."

Dhvani shared, "Singing and shooting for Kudi Meri was a surreal experience. I have enjoyed and danced to this song on so many occasions so making the music video made it even more enjoyable and what better than doing this with the OG. Manoj sir is a phenomenal person and adds so much to the video. Abhimanyu and I had a blast during rehearsals and I have finally danced to the steps of THE Ganesh Acharya Sir. But Kudos to Lijo and Chetas for keeping the original element whilst giving it their twist so beautifully and Yash for being my partner in this energetic song.”

Abhimanyu added, "The song is so lively, I kept grooving to it since the time I have heard it. Dhvani and I had a lot of fun working on this song with Ganesh Sir and his team. It was a great experience working with Manoj Sir & recreating this legendary song was fun. We enjoyed working on Kudi Meri and I hope the audiences will soon start grooving to it.”

Ganesh commented, "We all at various events have danced on the iconic song, and it was fun to give it our twist while choreographing and shooting for the recreation. Dhvani and Abhimanyu have brought so much energy on set and in their performances while Manoj Sir’s presence just makes it 100 times better.”

Producer Vinod Bhanushali said, "Everyone on the song has given their heart in making Kudi Meri and giving the audience an upbeat, energetic song they can dance to. My goal for recreating this cult classic song was so that the current generation who may not have even heard this song gets to enjoy it. The original one is loved and cherished by the audience all over and I hope the current generation does the same."

'Kudi Meri' is out on Hitz Music's YouTube Channel.