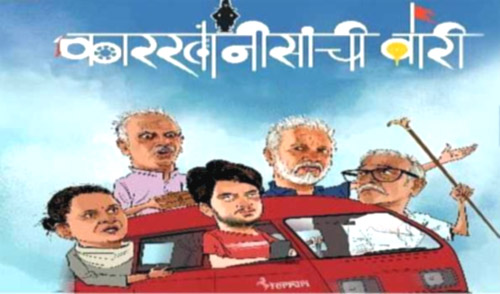 The Tokyo film festival, taking place under strict restrictions due to the coronavirus pandemic, continues as a physical edition this year albeit without the participation of foreign guests. Over 100 films from around the world will be screened during the ten-day festival, one of the major international film festivals in the world held in the Japanese capital.

‘Karkhanisanchi Waari’, Marathi filmmaker Mangesh Joshi's third feature film is a road movie starring Amey Wagh, Mohan Agashe and Geetanjali Kulkarni. Set in Pune, the film tells the story of the Karkhanis family. When the joint family's eldest patriarch passes away, his siblings and son undertake an eventful road journey filled with comical adventures and interpersonal conflicts from Pune to Pandharpur in Maharashtra to disperse his ashes to fulfill the final wish.

Joshi, who directed the Bhojpuri film 'He' in 2011 and the Marathi drama 'Lathe Joshi' five years later, is among the foreign filmmakers unable to present their films at the festival because of travel restrictions in Japan. One of the few countries that have been able to contain the spread of coronavirus, Japan has recorded about 100,000 cases and 1,769 deaths with nearly 90,000 recoveries.

‘Karkhanisanchi Waari’ is part of the new Tokyo Premiere section of the festival. The section has 32 films from across the world by both veterans and emerging directors.

Last evening's opening ceremony was attended by several prominent Japanese directors. “Since spring, we’ve been contemplating whether or not to hold the festival due to the pandemic," said festival chairman Hiroyasu Ando, who declared the 33rd edition open. "We believe in the power of films, even in this difficult time, and wanted to keep the beacon of film lit by holding the festival physically,” he added.

“The fact that in these challenging times you’ve found a way to honor and enjoy watching films on the big screen is a source of inspiration to myself and other filmmakers around the world," said Nolan in a video message. "And excitement around cinema and maintaining the excitement around the big screen experience not just for fans of movies in Japan but for all film lovers all over the world is extremely exciting," he added.

"Hopefully we can meet again for real and we will treasure being around strangers in the dark, seeing moving images together. But meanwhile we have to support our film industry," said Weerasethakul.

"This has been a difficult year for everyone,” said Frémaux. “However, organizing a film festival is a way to fight against those difficulties. People are making films all over the world, hoping that they would be shown and seen by the public. Encouraging the professionals also encourages the audience," he added.

The Tokyo festival will run up to November 9.