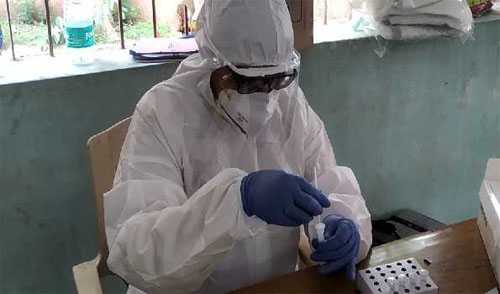 Aurangabad, Feb 23 (UNI) The eight districts of Maharashtra's Marathwada region reported 307 fresh COVID-19 positive cases were detected during the past 24 hours, health authorities informed on Tuesday.
However,the authorities also reported that five deaths were reportred due to the pandemic during the same period.
Details from all the district headquarters collected by UNI show that out of the eight districts of the region are,Latur district recorded 35 cases and 3 deaths followed by Aurangabad registered 132 new cases and single death,Nanded had 59 new cases and single death ,Jalna had 137 cases, Beed had 39 cases ,Parbhani had 22 cases, Osmanabad registered 11 new cases and Hingoli 9 cases.
As per official data, 5,210 more corona cases and 18 deaths were reported from across the state during the past 24 hours, taking the state's cumulative case tally to 21,06,094.
Meanwhile, 5,035 patients were cured and discharged from hospitals during the same period across the state, taking the total number of recoveries so far in Maharashtra to 19,99,982.
With this, the state's recovery rate has now risen to 94.96 per cent and the death rate stands at 2.46 per cent.
According to the health officials, so far, a total of 51,806 patients have succumbed to the disease in the state and more than 53,113 active patients are currently under treatment in Maharashtra.