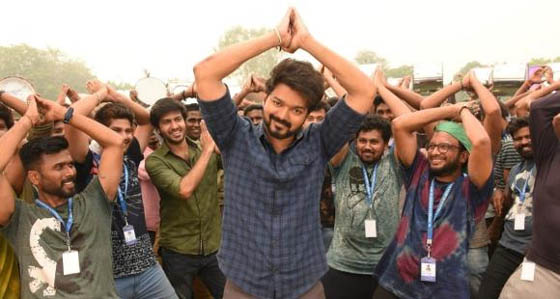 The much-awaited Pongal release Master, featuring Thalapathy Vijay and Vijay Sethupati, is finally set to hit the big screen across the globe tomorrow, and the trade analysts have sky-high expectations from the action thriller directed by Lokesh Kanagaraj. The movie is gearing up for a massive release in India in over 3800 screens, thereby becoming the biggest release till date for Vijay, by surpassing his last film, Bigil, which released on around 2500 plus screens. The screen count has got a major push owing to its release in Hindi as well since the shortage of content has led the distributors to go all out and give it a wide release.

Andhra Pradesh and Telangana: 700 plus

The advance booking for Master opened across the country on Sunday, and the tickets have been selling like hotcakes. In Chennai, the film is set to make an earth-shattering opening as it’s a full house across the city, well in advance. Of the 530 shows, we tracked, the film is recording a houseful board unanimously all across, indicating that a 100 percent opening on the limited capacity of 50 percent due to Covid restriction is on the card in Chennai, which is the capital of Tamil Nadu. Even the interiors and tier two cities in Tamil Nadu have recorded a full house in advance for the opening day, and the movie with all the restrictions and limitations is poised for a Rs 15 crore plus (gross) day one in Tamil Nadu alone, and stands a chance of coming closer to the Rs 20 crore mark (gross) as well. Vijay’s last film, Bigil had taken an opening for Rs 25 crore (gross) in Tamil Nadu. All India collections of Master can be around Rs 28 to 30 crore gross, with the Hindi dubbed version contributing in the range of Rs 1 crore.

The scenario is similar for the film in Karnataka, as of the 600 shows open for advance booking in Bangalore, over 510 shows are already sold out in advance, giving a glimpse at the hype around the film. Master is set to be by far the biggest opener in Indian cinema in the last one year, and with even decent word of mouth, it will certainly cross the Rs 100 crore mark at the box-office in India by the end of the first week. The advance booking is not limited to just day one as a major chunk of shows are sold out for the second, third, and fourth day too, and as days pass by, a bigger response is expected.

Master is set to be the film that will revive the cinema business down South in a big way and the initial response to advance ticket sales should give a sense of confidence to the producers in Bollywood to arrive with films, as yet again, it gives the message that a superstar in a well-packaged entertainer is bound to draw the audience. The advance sales is a reflection of the sheer raw-stardom of Vijay, and now, it remains to be seen how the film will be received by the audience.

The job of Vijay (the Master) is to bring audiences (students) back to the theatres (classroom) because nothing can beat the real experience of viewing cinema (learning) and he has succeeded in doing so in style with Master!