Mata Rani will ride on elephant 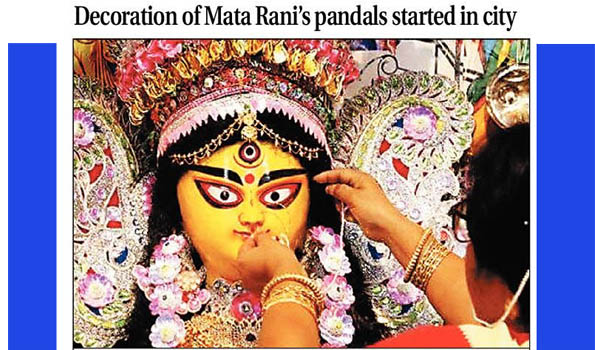 Chronicle Reporter, Bhopal
For the worship of Maa Durga, the holy festival is starting from September 26. All the religious committees of the city have made their preparations for the worship during 9 days.
Special events are also being organized by Shri Durga Utsav Samiti, Ganpati Chowk Mangalwara. Chairman of the committee Vivek Sahu told that this year Radhe Krishna's Rasleela, Mahakal's Bhasma Aarti, Aghori Sadhana, Maa Kali's Vikral by a special dance troupe from Mathura Vrindavan Roop, Krishna Sudama as well as a special program of magician Azad has been kept which will be the center of attraction for the children and daily worship of Goddess Swarupa girls will be performed. On the first day of Navratri, it is considered very special due to the wonderful combination of Shukla and Brahma Yoga. This year, on Navratri, Mata Rani will arrive on to the earth on an elephant ride. Maa's ride is considered very auspicious.The leading Durga Utsav Samitis in the city have almost completed preparations for the nine-day Navratri festival.

Auspicious time for Ghatasthapana
Ashwin Ghatasthapana will be done on Monday, September 26.
Ghatasthapana Muhurta will be from 06:11 to 07:51 in the morning. Its duration will be 01 hour 40 minutes. Ghatasthapana Abhijit Muhurta will be from 11:48 am to 12:36 pm. Duration - 00 hours up to 48 minutes.
These auspicious coincidences are being made on the first day of Navratri-
Brahma Muhurta - 04:36 am to 05:23 am
Abhijit Muhurta - 11:48 am to 12:36 pm.
Vijay Muhurta - 02:13 pm to 03:01 pm
Twilight Muhurta- 06:01 in the evening to 06:25 in the evening
Amrit Kaal 12:11 night to September 27 to 1:49
Importance of Shukla and Brahma Yoga
On the first day of Navratri, there will be Shukla Yoga till 08:06 in the morning and after this Brahma Yoga will start. According to the scriptures, the work done in Shukla and Brahma Yoga is considered very auspicious and fruitful.