‘Meri Sazaa’ song from ‘Vadh’ out 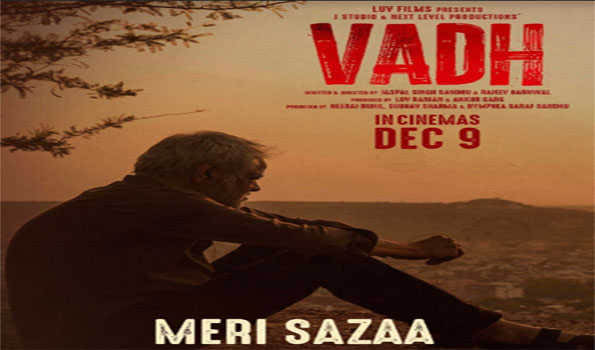 While, the trailer of the movie has revealed a thrilling side of the film, there is also an emotional aspect to the story which revolves around the rough journey and struggles of middle-class parents nearing old age.

The music of ‘Meri Sazaa’ is given by Mofusion, composition by Lavi Sarkar, lyrics by Naveen Kumar and sung by Hardik Bhardwaj. The song shows the story of Sanjay and Neena’s characters, their struggle when their son declines required financial aid. While goons trouble the parents, their son is living his life far away and insensitive to his parents' circumstances.

‘Vadh’ is written and directed by Jaspal Singh Sandhu and Rajeev Barnwal. The film is presented by Luv Films' Luv Ranjan and Ankur Garg and produced by J Studio and Next Level Productions.

The film will be released in cinemas on December 9.