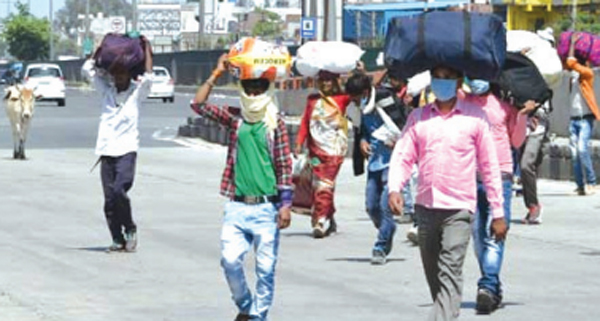 As a result of lockdown restrictions to fight COVID--19, migrant workers, pilgrims, tourists, students and other persons are stranded at different places in the country. Now, the Centre has permitted the movement of these stranded persons by road. They would be allowed to move between one State/ UT to another State/ UT, after the concerned states consult each other and mutually agree to.

It has also been impressed upon that on arrival at their destination, such person(s) would be assessed by the local health authorities, and kept in home quarantine, unless the assessment requires keeping the person in institutional quarantine. They would be kept under watch with periodic health checkups. For this purpose, States/UTs have been requested to encourage such persons to use Aarogya Setu app through which their health status can be monitored and tracked.

In its order, the home ministry asked states to appoint nodal bodies and draw up protocols for the movement of stranded people. "The moving person(s) would be screened and those found asymptomatic would be allowed to proceed," the government said. After arriving at their destination, they will have to stay in home quarantine for 14 days, unless institutional quarantine is advised, the order said.

Buses will be allowed for the interstate movement of the people and they should be sanitised between trips, the order read. The rules of social distancing should be maintained in the seating arrangements

The order comes less than a week before the lockdown is scheduled to end. On Monday, Prime Minister Narendra Modi held a fourth video-conference with Chief Ministers of around 10 states, where an exit plan from the lockdown was discussed.Several states, including Punjab and Bengal, have however said they need to extend the lockdown in view of the coronavirus situation

On Monday, the Centre told the Supreme Court that it was "very much concerned" about migrant labourers.

"The government is consulting with states on how many have to be transported … We are taking all kind of steps," Solicitor General Tushar Mehta had said.

Sources said the decision to allow stranded people to go home came afer pressure from within the BJP. There were concerns that the migrant crisis could damage the party politically and feedback to this effect was given to paryy chief JP Nadda during a virtual meeting with MPs and MLAs.

Uttar Pradesh became the first state to take action, transferring more than 12,000 migrant workers from Haryana over the weekend. Chief Minister Yogi Adityanath said he was also planning to bring back students who have been stranded in Rajasthan's Kota, a city known for coaching centres catering to aspirants for all kinds of competitive exams.