Modi and his ideas have destroyed India's economy, Rahul on Yes Bank crisis 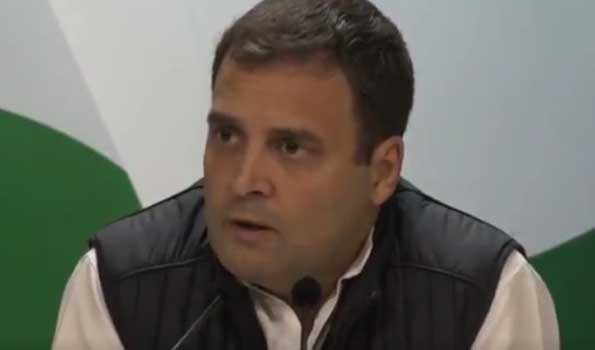 New Delhi, Hitting out at the Union government over the Yes Bank crisis, former Congress president Rahul Gandhi on Friday said Prime Minister Narendra Modi and his ideas have destroyed India's economy. Taking to twitter, Mr Gandhi said, "No Yes Bank. Modi and his ideas have destroyed India's economy". The Congress leader's response came a day after Reserve Bank of India put a moratorium on the withdrawals from the Yes Bank, restricting the withdrawal of deposits to Rs 50,000 for a period till April 3, 2020. Earlier in the day, senior Congress leader and former Finance Minister P Chidambaram also criticised the government and said that the ability of the BJP government to govern and regulate financial institutions stands exposed.

'BJP has been in power for six years. Their ability to govern and regulate financial institutions stands exposed. First, it was PMC Bank. Now it is YES Bank. Is the government concerned at all? Can it shirk its responsibility? Is there a third bank in the line?', he tweeted. Any withdrawal over the amount will require the permission of the RBI.
The RBI also said that it is superseding the board of the YES Bank with immediate effect. Former State Bank of India CFO Prashant Kumar has been appointed the administrator.As per a notification by the RBI, Yes Bank will not be allowed to pay depositors a sum exceeding Rs 50,000/- lying in any savings, current or any other deposit account.