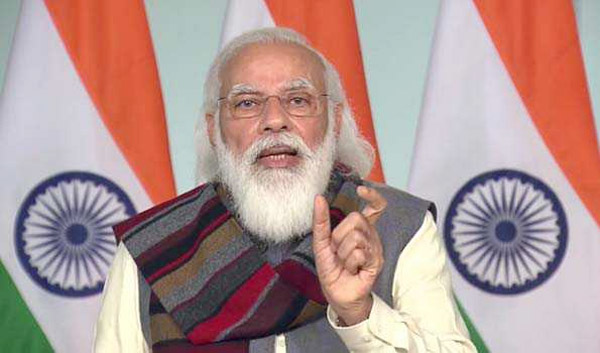 New Delhi, Feb 22(UNI) Prime Minister Narendra Modi on Monday pitched for stepped up private participation in domestic manufacturing in defence and make the sector self-reliant.
He urged the private sector to take up both designing and manufacturing of defence equipment so that "Indian flag can be kept flying high on the global stage."
He was addressing a webinar on effective implementation of the Union Budget provisions in the defence sector.
Modi said that there used to be hundreds of ordnance factories before independence. In both the world wars, weapons at large scale were exported from India. But, for many reasons, this system has not been strengthened as much as it should have been after independence.
The prime minister said that his government has relied on the capabilities of the country's engineers and scientists on developing the Tejas fighter aircraft and an order worth Rs 48,000 crore has been received for the aircraft.
He said that since 2014, it has been the government's endeavor to move forward in this sector with transparency, predictability and ease of doing business.
Modi said the government has taken steps to bring about de-licensing, de-regulation, export promotion and foreign investment liberalisation.
He further said that India has made a list of 100 important items related to defence, which can be manufactured indigeneously with the help of local industries.
A timeline has been set so that industries can plan to meet these requirements.
The prime minister said that a part has also been reserved for domestic procurement even in the capital budget of defence.
He said it is called a negative list in the official language but it is a positive list in the language of self-reliance. This is the positive list on which the country's manufacturing capacity is going to increase.
This is the positive list that will generate employment in India. This is the positive list that is going to reduce India's dependence on foreign countries for our defence needs. This is the positive list that guarantees the sale of indigenous products in India.
Describing the MSMEs as the backbone for the entire manufacturing sector, he said, the reforms that are taking place today are giving more freedom to MSMEs and encouragement to expand.
The prime minister said that the defence corridors that are being built in the country will also help local entrepreneurs and local manufacturing.
"That is, today, self-sufficiency in our defence sector has to be seen as the empowerment of these two fronts – Jawan as well as Youth," he said, according to an official statement released by the Prime Minister's Office.