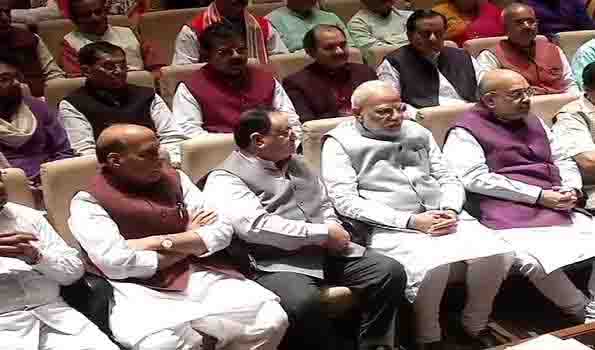 New Delhi, Prime Minister Narendra Modi on Tuesday called upon BJP MPs to contribute towards creating communal harmony in the country and pointed out that this was indispensable for national interest.Mr Modi made this call while addressing party parliamentary meeting held in the Library Building of Parliament here. After the meeting, Parliamentary Affairs Minister Pralhad Joshi told reporters that the Prime Minister said, "We have come here to fulfill national interests. The nation is of supreme importance us and development is our mantra.'The Prime Minister said peace, unity and harmony are indispensable for development. The remarks from the Prime Minister come in the wake of violence that took place in Delhi claiming over 46 lives. Lashing out at the Opposition, Mr Modi said for some political parties, party interest is more important than the country. 'We have seen the result of this,' he said, adding that all MPs should play a leading role in ensuring peace, harmony and unity in society. Mr Modi, hurt by the Delhi riots, became emotional while speaking, Mr Joshi said. 'The Prime Minister asked those who sacrificed their lives for independence, would have ever thought where have we have reached today. Why are we giving more importance to the party than patriotism,' Mr Joshi said.Defence Minister Rajnath Singh, Home Minister Amit Shah, BJP President Jagat Prakash Nadda, Union Ministers Nitin Gadkari and Thawarchand Gehlot were present in the meeting. Opposition MPs created a ruckus in Parliament on Monday, which was the first day of the second leg of Budget Session and both Houses were adjourned repeatedly.