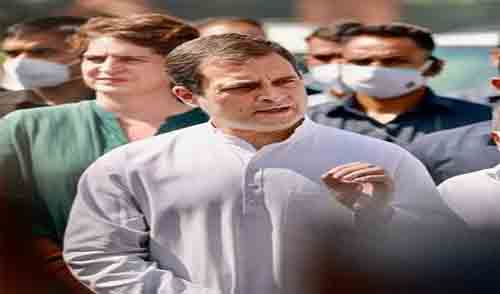 New Delhi Oct 19 (UNI) Congress leader Rahul Gandhi on Tuesday accused the Centre of failing to provide security to the people in Jammu and Kashmir and alleged that increasing incidents of violence have exposed the government’s policy regarding the Union Territory.

His remarks came after the incidents of target killings of civilians by terrorists in the Valley.

"The Modi government has proved to be a complete failure in controlling the violence and providing security in Kashmir, the incidents of continuous killing are sad,” he tweeted in Hindi.

“Some of our brothers from Bihar and UP have also been targeted,” he said.

“The Modi government does not have a clear policy regarding Kashmir,” Rahul said.

The Congress also attacked the government on Twitter, and said all the big claims made by the Centre following the revocation of special status to Jammu and Kashmir under Article 370, have fallen flat. Everyone knows what has been happening in the Valley, and people are scared.

“The condition of Kashmir is getting worse by the day, but the government is completely oblivious," the party said.

"Both Kashmir and Kashmiriyat are in danger," Congress tweeted in Hindi.

“Where is the BJP, which has been doing politics in the name of Kashmir for years. They are clueless," Congress tweeted.

Earlier in the day, Home Minister Amit Shah met Prime Minister Narendra Modi ahead of Shah's scheduled visit on October 23-24 to the UT.

So far, 11 civilians have been killed in the Valley in the last two weeks.