Modi should take responsibility of second wave of COVID-19: Kharge 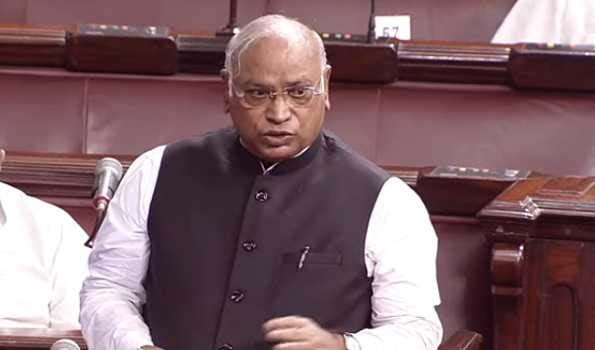 New Delhi, Jul 20 (UNI) Leader of Opposition in Rajya Sabha Mallikarjun Kharge on Tuesday said Prime Minister Narendra Modi should take responsibility for the devastating second wave of COVID-19 as he allegedly flouted rules brought by his government by campaigning amid the pandemic.
Speaking on the floor of the Rajya Sabha, the senior Congress leader claimed that former Health Minister Harsh Vardhan has been made the scapegoat for failure at the highest level.
"Former Health Minister Harsh Vardhan has been made the scapegoat but the PM has to take responsibility for the COVID crisis," Mr Kharge said.
"While other countries were preparing to tackle the second wave, the ministers here were busy campaigning. You were breaking the very rules brought by you," he alleged.
Mr Kharge showed the House some grim photos of bodies floating in river Ganga, migrant workers walking back to their homes and people waiting for medical oxygen.
The Congress leader claimed that the death toll from the COVID-19 was under-reported by the government.
"In this country, there are more than six lakh villages. Even if five persons died in a village due to COVID, this figure will go up more than 30 lakhs," Mr Kharge claimed.
"Also, there are more than 7,000 towns and if only ten persons died in each of these towns, more than seven lakh people would have died. If all this is put together, the number of deaths will far exceed the government figure of 5.5 lakh," Mr Kharge added.
On vaccination, the Leader of Opposition claimed that the order for the procurement of vaccine doses by the government was "too little, too late".
He questioned the government's claim of vaccinating the entire adult population by December 2021, as only 5.3 per cent of the population has been vaccinated so far.
Earlier in the day, Deputy Chairperson of the Rajya Sabha Harivansh Narayan Singh agreed to the Opposition demand and allowed a short discussion on COVID-19 situation.
Initiating the discussion, Swapan Dasgupta of the BJP said the government thought the COVID-19 pandemic will be shortlived but that was not the case as the third wave was also expected.
"This pandemic is a constant learning experience," he said.
Recalling the previous session of the Rajya Sabha, Mr Dasgupta said only few members were seen wearing the face mask despite the warning from the Chair.
Giving suggestions for tackling the pandemic better, the BJP member said a mutual corporation and transparency between the Centre and the State is paramount.
"We can't have the State going left and Centre right. Health is a state subject and the Centre can only coordinate", he added.