Mohanlal wishes Sanjay Dutt on his birthday with a throwback photo; Pens a heartfelt note 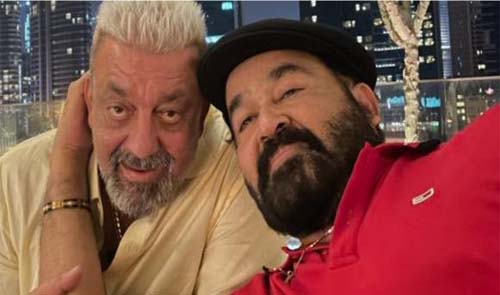 Sanjay Dutt celebrates his 62nd birthday, today July 29 and fans are showering him with heartfelt wishes on social media. Even celebs and close friends of the actor from the film industry are sending him best wishes. Malayalam superstar Mohanlal has also wished his close friend and actor Sanjay Dutt with a heartwarming throwback photo from their Dubai holiday. Sharing the photo on Twitter, Mohanlal wrote, "Wishing you loads of happiness and good health today and always...Happy birthday dear Sanju Baba."
It was last year when Sanjay Dutt along with his family went on a holiday to Dubai. Mohanlal also joined him and they had a gala time together. The photos of them enjoying and making good memories had taken social media by storm. Sanjay Dutt was also amazed by Mohanlal's singing talent. A video of him watching a clip of Mohanlal singing late actor Rishi Kapoor's popular Hindi track, Main Shayar Toh Nahin had surfaced on social media.
On the work front, Sanjay Dutt will be seen sharing screen space with Yash in the upcoming Pan-India film KGF: Chapter 2. The film is directed by Prashanth Neel. This morning, the makers released a birthday special poster featuring Dutt.
KGF 2 is starring Yash in the lead role is expected to be bigger, better and like never before. The film also stars Raveena Tandon, Prakash Raj and Srinidhi Shetty in important roles.