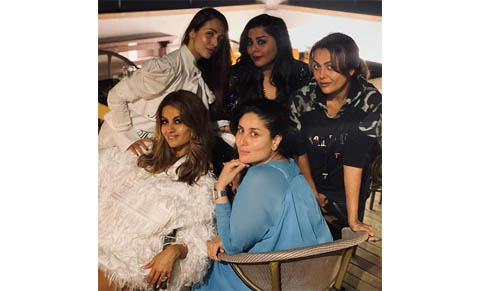 Kareena Kapoor Khan, who is expecting her second child with Saif Ali Khan is in Mumbai and skipping no chance to have fun in her pregnancy days. Kareena Kapoor shares a special bond with her BFFs Malaika Arora and Amrita Arora and recently decided to catch up with her girlfriends to have a quality time.

Kareena had a fun night with her girls as she shared a glimpse of the same on her Instagram. Sharing the group picture from dinner night, Kareena wrote, "Reunited ????

Kareena's sister Karisma Kapoor was missing from the party as Kareena wrote, 'missing lolo'. Karisma also missed the fun time as she dropped some heart emojis in the comment section.

Talking about Kareena's work front, the actress has recently wrapped the shoot of her forthcoming film 'Laal Singh Chaddha'. Loosely based on Hollywood drama 'Forrest Gump', Aamir Khan will be seen playing the titular role in the film. The film is expected to release in the first quarter of 2021.