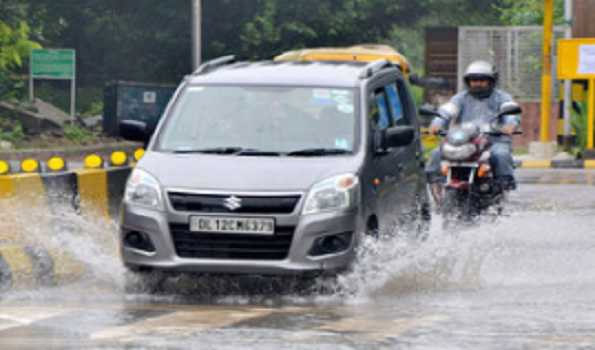 New Delhi, Sep 12 (UNI) The India Meteorological Department (IMD) has forecast heavy rainfall and thunderstorms on Sunday, as the low-pressure area "over east Rajasthan and another forming over the Bay of Bengal is likely to intensify further."
According to the Met department, heavy rainfall in Delhi will continue till tomorrow morning. It will cover Delhi-NCR, Punjab & Rajasthan.

"Systems over east Rajasthan & another forming over the Bay of Bengal is likely to intensify further. Delhi will receive a fresh spell of rain from Sept 17-18," it said.

"Delhi has recorded 1139 mm rainfall in four months, which is highest in 46 years," he said.

The observatory at the Ridge logged 67.6 mm.
The incessant rainfall on Saturday has caused extensive waterlogging that affected operations at the Delhi airport, disrupted traffic on key roads, and left passengers trapped inside vehicles in flooded underpasses.

As many as 380 complaints related to waterlogging were received by authorities in Delhi on Saturday after the national capital was pounded by the rain, officials said.

Incidents of tree uprooting incidents were also reported in several areas across the city.

On Sunday, the minimum temperature was settled at around 24 degrees Celsius, one notch below the normal.

"The maximum temperature will be hovering around 30 degrees celsius," said the IMD.