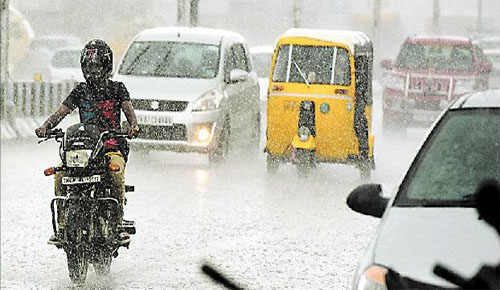 Bhopal: A monsoon system has become active once again in Madhya Pradesh. In the last 24 hours, rainfall occurred in 11 districts of the state. Among them, Indore received maximum 5 cm of rainfall.
In Bhopal, the weather was sultry on Saturday morning as Sun shone brightly. But dark clouds covered the skies and rainfall occurred in many localities of the city.
The Meteorological Center has issued an alert of heavy rain in 8 districts in the next 24 hours. Apart from this, it also rained in Mandsaur, Sagar and Indore.

Heavy rain alert
Meteorological Department has predicted up to 20 cm of rainfall can occur in Dhar, Betul, Khargone, Bhind, Datia, Dewas, Tikamgarh and Chhatarpur within 24 hours. At the same time, there is a possibility of lightning or thunderstorm in Bhopal, Sagar, Hoshangabad, Rewa, Gwalior and Chambal divisions. There is also a possibility of rain in Shahdol, Jabalpur, Indore and Ujjain.

Clear weather in Umaria, Jabalpur and Hoshangabad: Apart from this, the weather is sunny in Jabalpur, Hoshangabad, Chhindwara, Sehore, Umaria, Agar Malwa, Dewas. At the same time, there are clouds in Ujjain.