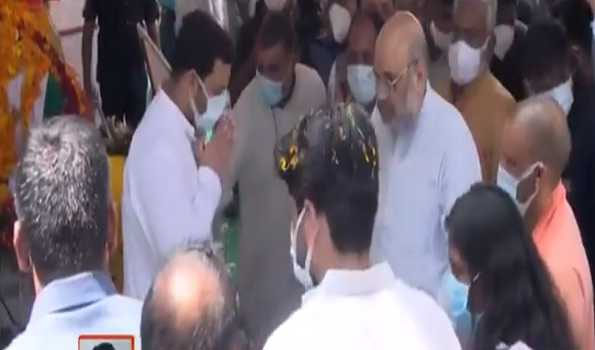 Atrauli(Aligarh), Aug 23(UNI) Mortal remains of former chief minister Kalyan Singh have been brought from Aligarh to his native village Atrauli here on Monday amid chants of 'Jai Shree Ram'.
Singh will be cremated at 1700 hrs on the banks of the river Ganga at Narora in Bulandshahr.
Union Home Minister Amit Shah, along with Madhya Pradesh Chief Minister Shivraj Singh Chouhan, also reached Atrauli to pay their last respect to the departed leader. They were accompanied by Uttar Pradesh Chief Minister Yogi Adityanath.

Mr Shah, after paying homage to the former CM Kalyan Singh said," I had talked to Babuji, the day the foundation stone of Ram temple was laid. He said that the goal of his life has been fulfilled. Babuji's entire life was devoted to the development of UP and the poor. Gave better direction to the country and presented a new momentum for development."
"His death has left a vacuum in the BJP which cannot be filled for a long time. Babuji used to play his full political role even though he was not in active politics for a long time. The youth also considers Babu as its role model. He will always be the inspiration source of BJP," Mr Shah added.
Morning the demise, Chauhan too said that Singh was the real hero of the Ram Janmabhoomi movement. His sacrifice would be remembered forever," he added.
The body of the former CM has been brought from Maharani Ahilyabai Holkar Stadium in Aligarh to his native village in Atrauli and kept in the annexe building.
Earlier, people flanking the road from Aligarh to Atrauli paid their last respect to their popular leader.
On Sunday, his body was brought from Lucknow to Aligarh's Dhanipur Airport by air ambulance and taken to Ahilyabai Holkar Stadium.
Under the constant supervision of Chief Minister Yogi Adityanath, people here paid their last respect .
State Minister Surya Pratap Shahi, BJP leader and Bareilly MP Santosh Gangwar and Mayor Mohammad Furkan also paid their homage.
Governor Anandiben Patel and other state ministers have also reached Atrauli.
On learning about the body being brought from Aligarh to Atrauli, people stood on the roadside for hours to bid farewell to their popular leader.
Every eye was desperate for the last glimpse. People had reached Ramghat Road from every nearby village. Women were also seen waiting by the roadside.
The body was taken from the stadium to Atrauli. The mortal remains were not taken inside his village.
During the last journey, sea of people gathered everywhere with people chanting 'Jai Shri Ram'.