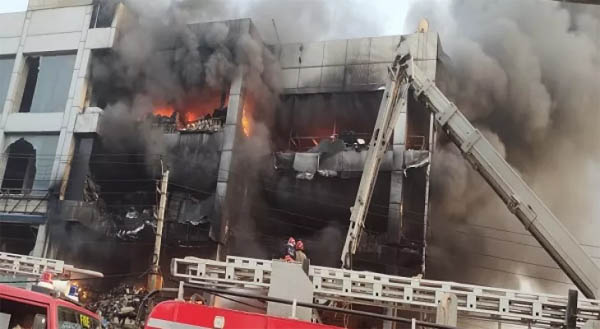 New Delhi,  (UNI) At least 27 people died and over 12 were injured in a major fire that broke out in a building near Delhi's Mundka Metro Station on Friday. The search operation was still underway at the spot to rescue other persons who are believed to be trapped in the four-storey building, said Delhi Fire Department. The Fire department officials said they have recovered 27 bodies and rescued over 50 people from the building. The department said the death toll could go up, as many people were feared trapped inside the building. According to police, police officials broke the windows of the building to rescue the inmates. Over 12 people have suffered injuries in the blaze and were getting treatment at Sanjay Gandhi Hospital. Union Home Minister Amit Shah tweeted, “The incident of fire in Delhi's Mundka is very sad. I am in constant touch with the concerned officials, the administration is engaged in relief and rescue work. NDRF is also reaching there soon. Our priority is to evacuate people and provide immediate treatment to the injured.” Reacting over the tragic incident, Delhi Chief Minister Arvind Kejriwal tweeted, “Shocked and pained to know about this tragic incident. I am constantly in touch with officers. Our brave firemen are trying their best to control the fire and save lives. God bless all.” A senior police official said the blaze broke out in the first floor of the building, which is an office of a CCTV cameras and router manufacturing company. Police found in preliminary enquiry that the building was a four-story commercial condominium, occupied by several companies as their office space. At least 30 fire tenders of the fire brigade were pressed into service to control the fire. Ambulance facility was also made available at the spot to provide immediate medical assistance to the rescued victims, said Sameer Sharma, Deputy Commissioner of Police, Outer Delhi. Delhi Deputy Chief Minister Manish Sisodia tweeted, “The fire accident in Mundka is very sad. The Delhi government will stand by the grief of the family of every person who lost his life in this accident. I wish all the injured a speedy recovery.”