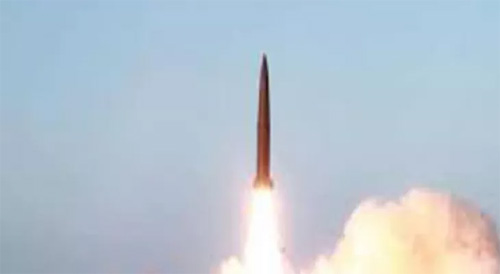 Seoul, Jan 27 (UNI) Two apparent short-range ballistic missiles were launched by North Korea on Thursday towards the East Sea, South Korea's military said. According to the South Korea's Chiefs of Staff (JCS), the launches were detected from in and around North Korea's Hamhung city and the missiles flew around 190 kilometers at a top altitude of 20 km. "For more details, the intelligence authorities of the South and US are conducting a detailed analysis," the JCS said. These missiles' launch marks the sixth one of the year by the North. The North had apparently tested at least two cruise missiles from an inland area on Tuesday after four reported rounds of weapons tests, including hypersonic missile launches on January 5 and 11, Yonhap News Agency reported adding the North had also tested the KN-23 missile -- modeled after Russia's Iskander ballistic missile -- on January 14 and its own version of the US' Army Tactical Missile System, called the KN-24, three days later. The North's saber-rattling show came as US has been stepping up sanctions pressure amid a protracted deadlock in its nuclear negotiations with the recalcitrant regime, according to Yonhap's report. US President Joe Biden and Japanese Prime Minister Fumio Kishida had also condemned the missile launches by the North during their virtual summit on January 21.