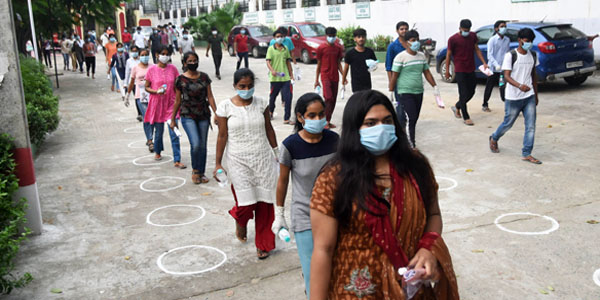 Till Saturday evening, over 15 lakh aspirants out of nearly 16 lakh, have downloaded the admit card, officials here said. However, how many of them finally took one of the toughest entrances, will only be known later.

The pandemic changed many things. Students appeared for the examination in the middle of September, instead of May. Apart from admit card, identity proof and stationery, they carried face mask and hand gloves to the examination halls.

The National Testing Agency (NTA), tasked to take the examination, divided the students in centres with more than 900 aspirants into two slots - 1100 hrs and 1400 hrs.

The examination centres were increased to 3,862 from 2,546 in 2019. Moreover, the number of aspirants in classroom were reduced to 12 from 24, to maintain social distancing.

The students were allowed to enter, only after going through thermal screening.

As per reports from several states, the students were seen coming a bit early than usual and queuing up, keeping a distance of two-feet among themselves.

In Lucknow's Hazratganj, a female aspirant looked worried. But her cause of worry was not the paper's toughness, but mask on her face and hands in gloves.

'I don't know how will I manage with this mask and gloves. It's already sweating,' the 18-year-old Lucknow girl said.

Unlike other entrances - engineering, law etc - the NEET is a subjective paper, where a student has to write answers.

Another student from Hyderabad said she practiced sample papers by wearing a mask and gloves. “I wanted to test myself in real situation,” she said.

With many looking relaxed as they almost got five more months this time to prepare, some seemed to be tensed as they doubted whether these extra months do not increase the toughness of an already tough paper.

Several states made special arrangements for the day. Some ran metro others free bus service.

But in Tamil Nadu, situation was entirely different.

Activists of various students' federations and political parties staged protests against the NEET across the state, a day after three Medical aspirants ended their lives fearing failure in the exam.

In Madurai, police detained 30 protesters when they blocked vehicular movement at Narimedu, demanding the Centre to scrap the NEET.

However, no incident of any violence or inconvenience was reported at any exam centre.

The NEET went through a roller coaster in past five months. It was postponed twice by the Centre due to COVID-19 pandemic. It also entered the courtroom with several petitions underlining the health risk in conducting the paper.

The medical examination also became a political slugfest with opposition-ruled states uniting against the paper.

The dust was finally settled by the Supreme Court, as it gave a 'green signal' to the paper and asserted that 'life has to go on'.

The review petition filed by some states was also rejected by the Apex Court.

Meanwhile, parents were seen in most of the centres, as per reports, waiting outside for three hours.

In the evening, a parent tweeted, 'Seeing my son coming out of the centre was like a soldier returning from war.'

The date of result has not been announced by the government so far. As per rules, the NEET score card is valid for a year. Due to the COVID-19 pandemic, the academic session from July has shifted to January 2021.