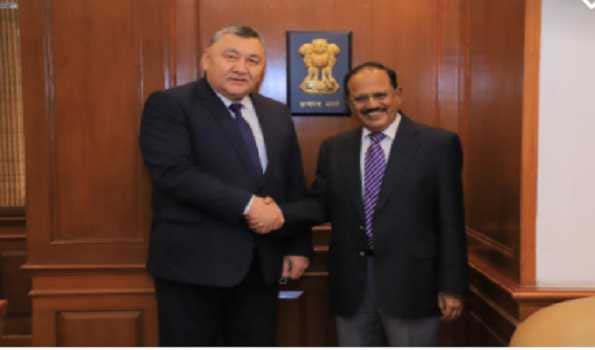 New Delhi, Oct 26 (UNI) The National Security Advisors of India and Kyrgyzstan on Tuesday held talks on the threats and challenges facing both countries as well as the regional security environment, with special reference to Afghanistan.

The talks were held between visiting Secretary of the Security Council of Kyrgyzstan Lt Gen Marat Imankulov, and Indian NSA Ajit Doval here.

The talks were part of the inaugural Strategic Dialogue between their National Security Council Secretariats.

According to sources, 'The two sides held discussions on threats and challenges facing both countries as well as the regional security environment, with special reference to Afghanistan".

The two sides also welcomed the similarity of views on these matters, and agreed upon steps to enhance bilateral security cooperation between the relevant bodies, including in the fields of counter-terrorism, combating radicalisation, narcotics control and defence cooperation, sources said.

The meeting between the two NSAs comes days after External Affairs Minister S Jaishankar was in the Kyrgyzstan capital on October 11, during which he called on Kyrgyz President Sadyr Japarov and held talks on expanding the bilateral economic and development partnership and also exchanged assessments on Afghanistan.

It was the EAM’s first visit to Kyrgyzstan.

During his talks with Kyrgyz Foreign Minister Ruslam Kazakbaev, the two sides had “discussed issues of regional security and the situation in Afghanistan, the fight against extremism and terrorism, and also stressed the need for close interaction and exchange of information in order to counter regional threats and challenges”, a statement from the Kyrgyz foreign ministry noted.